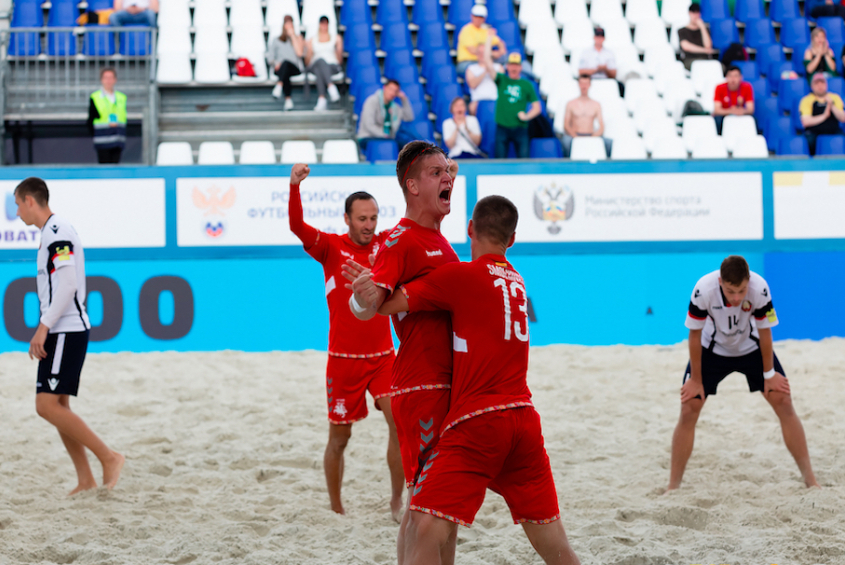 A star is born. And four crazy penalty misses in one game!

European World Cup qualification caught a good pace from the very start and keeps it up. The third day of the tournament once again gave us a lot of things to discuss. We say post-match penalties for the first time here in Moscow, noticed a very talented rising star from Germany and witnessed another great goals by the favorites.

It is only the weather that does not let us call it perfect. Normally July in Moscow is the hottest month of the year. Bot not in 2019. Weather forecast gives us a little bit more hope for the next week. So fingers crossed. Russian capital needs some sun.

Belarus was a big favorite against Lithuania in the first game of today’s group of matches in Moscow. BSRussia.com did an interview with Lithuanian’s head coach Sahib Mammadov who admitted that his team would be happy to achieve the level of Belarus beach soccer. Luthuania lost 1:8 in their first match in Russia, but they were very close to making the biggest surprise of the tournament today.

From zero to hero

Belarus was comfortably leading 3:0 at the start of the third period. Let’s be honest, not a lot of people would on Lithuania at that moment. But they did the most inspiring come back of this World Cup qualifier and scored three goals.

Their third goal was scored by Alvaras Meskinis. The interesting part is that this very player missed two penalties in the first period. You just can’t make these things up! Beach soccer sometimes better scripts than movies. Meskinis really went from zero to hero within this match.

Lithuania still lost the game. There were no goals in extra time. So then came the penalties. Lithuanians missed another two in the series which made it four in total. They could not score a single shot from the penalty in this game. This is amazing and scary at the same time. That just does not happen every day.

Sahib Mammadov’s team still has one more chance to qualify for the next round. Most likely they will need to beat Turkey tomorrow to keep their World Cup dreams alive.

A star is born

Germany lost both games at the start of the World Cup qualifier. They did not have any chance against Russia. They fought Hungary till the end but lost. However, beach soccer specialists surely noticed one young player in German’s squad. His name is Christian Biermann. He scored against Russia, he got two goals against Hungary. I

In a very important game vs Estonia Christian scored four goals and was the main reason why Germany qualified tor Round 16 of the World Cup selection. The Germans were leading 4:0 but then conceded three goals. 35 seconds were left on the clock. Everything was heated up. And that’s where Biermann came on stage again with his amazing free kick.

Whoever plays Germany in Round 16 next will have to be very careful with Christian Biermann. Germany scored 9 goals in Moscow so far and Christian got 7 out of them! And it feels like he will not stop.

Turkey lost two games in Moscow but remains confident they can qualify for the World Cup. The head coach Emrah Aykurt told BSRussia.com that the goal for the team is to be in top-5 in Russian capital. That would mean getting tickets to Paraguay.

Turkey was playing good against Switzerland today leading 2:1 after the first period, but lost control in second and conceded three goals. Turkey will need to beat Lithuania tomorrow to stick with the plan.