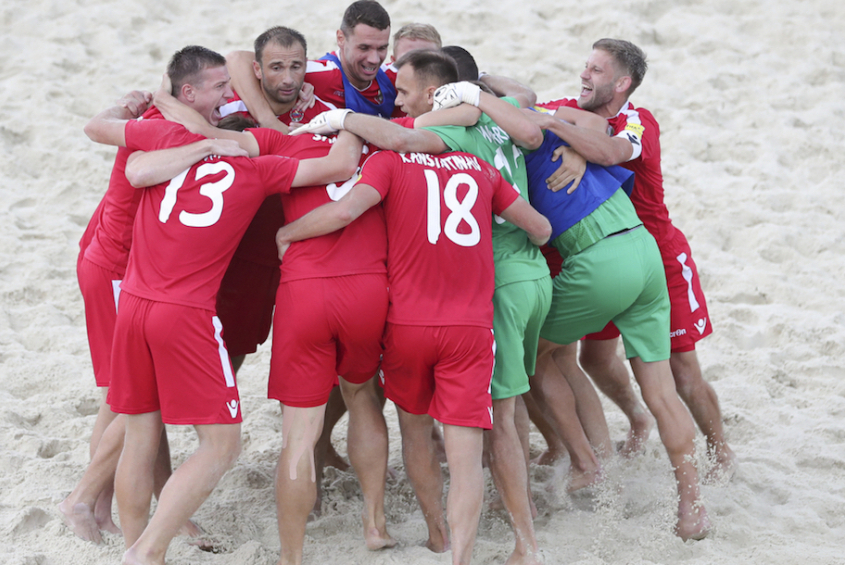 Bravo, Belarus. Nico's team surprised Portugal and got one step closer to the World Cup

Azerbaijan tried to do the same against Spain but did not succeed.

8 teams. 5 tickets to the World Cup. It might seem quite an easy task. You just need to be number 5 out of 8 countries. But in reality it’s the toughest completion you can possibly imagine. These are the best European teams. Some of them are a little bit stronger on paper, but still any team can beat any team at this stage of tournament.

All of them equally want to go to the World Cup. Yesterday it was “do or die” situation in Round 16, because if you lose you go home. The second group stage gives you room for mistakes.

Del Mestre is on fire

The opening game of the day was between Poland and Italy. Poland was not as impressive at this tournament as it was in previous World Cup qualification when they left Russia off board. Here in Moscow had a lot of difficulties against Czech Republic and Germany. They were lucky to get to the second group stage.

But they managed to leave it all behind and put on a great fight against Italy. They took a lead and had a few other good chances to score, but Italian’s goalkeeper Simone Del Mestre was on fire. He did a few saves and then took responsibility and took a great shot. He tied the game when Italy needed it the most.

His team-mates were inspired by such turn of evens and scored another two goals later in the game. Poland could have levelled the score a few times but Italy took a very important win. They are just a step away from the World Cup.

Belarus just like Poland did not impress in the first group stage. But Spanish coach Nico managed to get his team ready in the right moment. Just before the big games. Yesterday Belarus got a confident win over France. And today they beat one of the favorites of the whole tournament, team Portugal.

Belarus definitely knew what they were doing on the sand. All their moves made total sense. They knew when to speed up and when to slow down. No surprise they were able to take a 3:0 lead in the middle of the game. And, of course, Belarus had a big help from its fans who were cheering very loud during the game.

Portugal, on the contrary, got completely lost after they conceded a few goals. It seemed they were making fouls every single minute. Vadim Bokach suffered a lot in particular from opponent’s aggression. Portuguese players could not control their emotions and that was one of the reasons Portugal could not come back. Belarus did everything right and deserved this victory. The World Cup dreams become more and more realistic.

Belarus players had some questions to the officials after the game. Some of their decisions really looked weird, but it did not affect the overall result so it probably should be put aside.

Azerbaijan shocked Spain, but only for a moment

Azerbaijan tried to do what Belarus did in the previous game. They were leading 3:1 against Spain in the middle of the game! It’s already a big success for Azerbaijan who is trying to get closer to the top teams’ level. But Spain is in excellent shape here in Moscow. They have so much experience and class. They did not panic, stayed calm and scored 8 goals in a row.

Most likely Azerbaijan will be fighting with Switzerland for the third place in the group. Considering what we saw from the Swiss in a game against Russia, Azerbaijan has a chance to qualify to the World Cup.