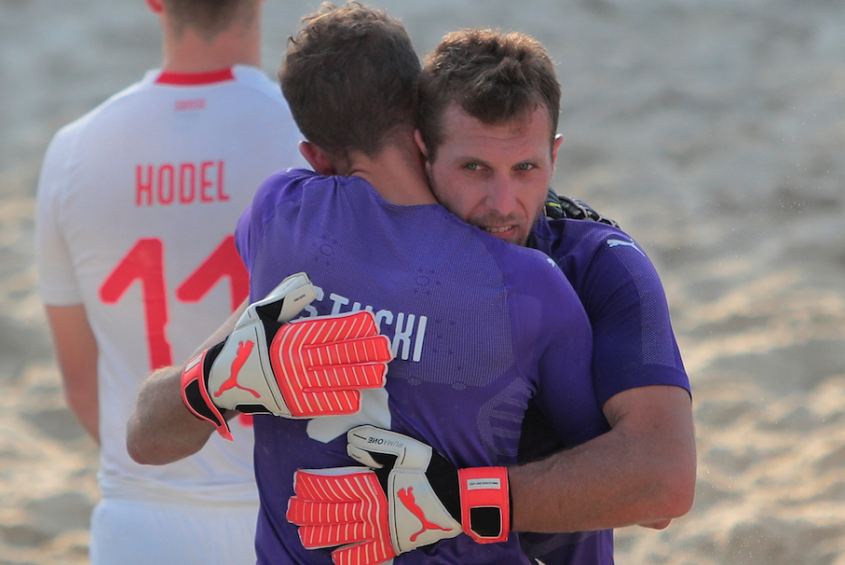 World Cup without Portugal or Spain? This is a reality now.

One of the two iconic teams will not go to Paraguay. Another game day was very dramatic in Moscow.

6 out of 8 teams woke up today with the hope to go to the World Cup. Only Belarus and Poland did not have that super motivation. But for different reasons. Belarus qualified to the World Cup for the first time in their history. It was the happiest day for beach soccer in this country. Poland, on the contrary, lost the last chance to get tickets to Paraguay after losing to Portugal.

So it made sense that these two teams played first in the last round of the second group stage at Luzhniki stadium. Belarus was in the lead in the first period but Poland came back and got the victory. That did not change much in the standings. Belarus still goes to the World Cup.

The second game of the day was completely different. Switzerland and Azerbaijan put on a great fight. Only two goals were scored in the first 24 minutes of the match – 1:1. It felt that Azerbaijan was playing a little bit better but could not capitalize on their chances. The Swiss fought hard and did not concede any goals when the opponent was striving for success in the second period.

Switzerland managed to hold on and used their chances in the third period. The game was very emotional, yellow cards and even a red card was shown at some point of the match. The Swiss got the victory and had to wait until the end of Russia – Spain game…

There was a feeling something has changed during the game between Portugal and Italy. It was the picture from Luzhniki stadium, because the stands were almost full! Lots of people decided to come and watch some world-class beach soccer before cheering for the home team.

And the fans got this world-class soccer. You could not underestimate the importance of this game. Italy and Portugal were battling for direct ticket to Paraguay. It was crazy to think that either Italy or Portugal could be left out of the World Cup. But that was a reality.

Italy and Portugal’s fans had to take anti-stress pills after this game. Portugal was in the lead for the most part of the clash, but Italy found some inner-power to turn things around in the third period. It was not clear who was going to win until the very last minute. There was a lot of emotions and a lot of drama involved.

Italy came up big and the got the win they needed the most. They are going to the World Cup. Portugal still has a chance to book flights to Paraguay. But they had to wait another hour to find out who they were going to play.

World Cup without one of the top teams

Russia and Spain competed this game day. Switzerland’s captain Mo told BSRussia before this match that his heart belonged to Russia today. That made sense because the Swiss team needed the home country to win to qualify to the World Cup. And Russia did not let Mo down.

Mikhail Likhachev’s team is in amazing shape at this tournament and got a comfortable win 6:1. That means that Spain will play Portugal tomorrow for the last ticket to the World Cup. Whatever the result is going to, we know for sure that the biggest competition in beach soccer will happen without one of the top teams.