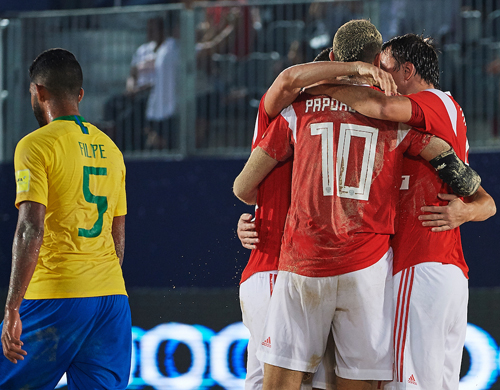 Dubai nights, you will be missed!

The eights Intercontinental Cup gave Russia a big win over Brazil and great sadness because of the loss in the final game.

Intercontinental Cup in Dubai for the eighth time in a row summed up the year in beach soccer. Best national teams of the world as well as best players of modern beach soccer got together in Emirates. Some teams celebrated victories and received awards and medals, and other teams lost big time and finished their season with a hint of disappointment. Last week events affected both Russians players and Russian fans. They will keep some happy memories, but there will also be something to forget.

Let's start with happy moments. Semifinal of the Intercontinental Cup-2018 added another bright page to the history of the confrontations of two powerful teams – Russia and Brazil. Prior to this meeting Brazilians with Gilberto Costa did not lose to anyone for two years and within 66 matches. And it was the Russian team that stopped Brazil. Just like in 2011. Everything was very dramatic! Brazil was losing badly but stayed in the game by scoring twice in the last few minutes. In overtime they took the lead, but then Boris Nikonorov scored perhaps the most important goal of his career. In penalty shootout Russia was better.

This victory brought Russian fans back to the beginning of 2010s, when our team was unconditionally the best in the world. And it also gave hope that the team will be able to return to the top.

Russian team had another unusual match at this tournament. Game against the United States was supposed to be just an ordinary one, but for a number of reasons fans and players will not forget it anytime soon.

Our team defeated Americans with a score of 13 to 3 and thus set a record for the number of goals scored. The previous number was 12. Also Russians equaled the record for the biggest difference between scored and conceded goals. Before this game Russia was never able to score 10 goals more than the opponent. And finally Fedor Zemskov wrote his own fairytale. He scored six goals in one game for the national team. What an outstanding result! Before that only Yegor Shaykov managed to do this. As a result Zemskov became the top scorer of the Intercontinental Cup. Although it will be safe t say that Fedor would gladly exchange his personal award for a win of the whole team.

The final. Iran. Defeat. This is also a part of the history.

There is no longer any doubt who is the most inconvenient and harmful rival for the Russian team. Russia and Iran have met nine times at the Intercontinental Cup, and our team won only three matches. Two final games in 2013 and in 2018 were in favor of Iran.

Iran played the most inconvenient soccer for our team. They would score a goal and then play super defensively, closing all zones for the Russians. There was also some trash talk and cheating involved. But on your way to the victory you do whatever it takes. Russia could not do anything against such a team that wants to go under your skin.

Concluding two games against Iran, we can say that our team may only be happy with the way they played the third period of the group stage match. Things could have been different, if the Russians crushed its opponent then. But you get what you give. Therefore, all we can do is to congratulate Iran with the victory. Russia became second which is not a bad result after the fourth place in 2017.

In beach soccer comebacks happen a lot. But at the Intercontinental Cup-2018 there was too many of them. Every day at least one team came back big. Let’s single out two of them

First of all, Egyptians rescued themselves in the key game of the third round against Spain. Egypt turned 4: 6 to 7: 6 during the last three minutes of the third period and went to the semifinals. The second huge comeback of the tournament was made by the UAE team: the hosts were close to finding themselves on the last place, but managed to score five goals and sent the Tahiti team to the eighth place.

USA and its big break

The U.S. team was the main surprise of the Intercontinental Cup. Yes, the Americans smashed by Iran and Russia, but showed their best against the competitors of their own level. Tahiti won the USA only in overtime, and the UAE and Spain lost to the team from North America. Thus, the Americans stopped their unpleasant series of defeats and for the first time in their history finished not in the last position in Dubai!

It's nice, because you always expect more from this team. If U.S gets the taste of beach soccer, our sport will be easier to develop globally. That is why their success should make everyone happy.

The final chord of the Intercontinental Cup was the traditional ceremony called "Beach soccer stars". The Russians did not leave with empty pockets: President of the RFU Alexander Alaev received the award for his “Contribution to the development of beach soccer”, and Marina Fedorova was rewarded as the best “beach soccer female player” in 2018.

In other nominations Russians did not get prizes though. It was especially sad for Maxim Chuzhkov. For some reason two goalkeepers awards went to the Portuguese Elinton Andrade. Russian goalkeeper for the second time in a row only made it to being in the top three nominees.

Everything else did not bring any surprises. The best player in the world was the Spaniard Lorenz Gomez. Ozu Moreira, Bruno Xavier, Elinton Andrade and Datiña concluded the symbolic top five. Brazilian coach Gilberto Costa became the best coach of 2019.