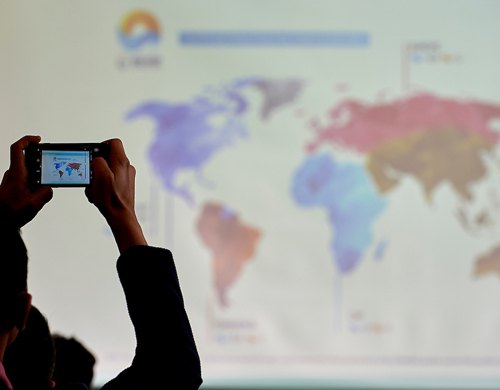 New Year started in November. What do we know about the 2019 calendar?

The draft of the 2019 season was presented in Dubai which included the dates World Cup will be held and the long-awaited club ranking.

“We never had such a busy year in the history of beach soccer”, - that was the main motive of the 2019 season launch event, which was held in Dubai during the final matches of the Intercontinental Cup. There is no exaggeration here. For the first time in the history of beach soccer the World Cup, the World Beach Games, and the European Beach Games came together in one year. And we only talk about key tournaments!

At the 2019 Season launch event BSWW executives presented a draft calendar for the following year. Everything really turned out intense and stressful. At the same time, there will be a lot of interesting innovations in European and world beach soccer.

BSRussia studied the whole calendar in details and distinguished the most interesting things about it.

In any case the World Cuo is the number one competition. It is also important to mention that there was a real fight with FIFA to make it happen. FIFA wanted to hold World Cup every four years in beach soccer. Just like in big football or futsal. But the two-year cycle survived.

So, the World Cup will be held in the capital of Paraguay - the city of Asuncion. Estimated dates are from November 21st to December 1st. Although some small moves are still possible. Dates have not been officially approved yet, but BSWW is waiting for approval as soon as possible.

In terms of the format there is only one surprise - fifth ticket for Europe.

In regard to the qualifiers, fans of beach soccer in Russia were pleased with the unexpected and extremely pleasant news. European qualifying stage of the World Cup will be held in Moscow. A similar tournament has already been held in the Russian capital in 2012. Russia took second place at home and went to Tahiti, where it was able to defend the title and become two-times world champion.

Waiting for a lot of good games

Four tournaments with the keyword “Games” were announced at the event.

The first one is the well-known European Games, which will be held in the middle of summer in Belarus. Everything is simple and clear here: dates are fixed (June 25-29), stadium is ready, participants are determined. Russia, if you suddenly managed to forget, will be among the participants of the tournament in Minsk and will try to defend the title that was won in 2015 in Baku.

Here comes the second one. South American Beach Games will be held in Rosario (Argentina) from March 18 to 24. There will be all 10 teams of the continent. The format has not yet been determined though.

The third one. Mediterranean beach games will be held in Patras (Greece) from August 25 to 1. There will be up to 20 teams of the Mediterranean. The format also has not yet been determined.

The fourth and the most interesting. World Beach Games in San Diego (USA) will be held from October 9 to 14. The competition will be attended by 16 men's and 8 women's teams, while all participants will be known after qualifying staged.

Date when the qualifying tournaments will be held:

It should be noted that the venue of the tournament is already determined only in Oceania. We know that the tournament will be held in Tahiti. In all other confederations locations will be waiting for approval. It is also not clear yet where and how the fifth team of UEFA zone and the third team of CONMEBOL will fight for the last vacant spot of the World Cup.

Euroleague-2019 will be held in a short format: three stages + Super Final. Four teams from Divisions A and B will play at each of the three stages. Therefore, all teams will participate in only one stage and will play only three or even two games.

The schedule of the Euroleague-2019 is here:

The usual Moscow Euroleague stage was changed to the World Cup qualifier. If we talk about other traditional tournaments, Intercontinental Cup (November 5-9) and Mundialito (July 12-14) will also take place. There will also be a European Cup for women.

Women will also play in BSWW Tour in Puerto Vallarta (Mexico) and in San Diego (USA). All these performances will be taken into account in terms of women's national teams’ rankings. In the current version of the world rankings Russian women's team is in the fourth place behind Spain, Switzerland and England.

European Cup will be the main club tournament in 2019. The organizers expect more than 60 teams for men and more than 24 for women. Nazare Cup will be renamed to Challenge Cup, but the concept of a two-tier tournament will stay the same. Best clubs will go directly to the main draw, and other teams will have to go through some sort of qualification. In order to determine best clubs BSWW has finally announced the introduction of a rating for European clubs and countries.

Performances of clubs in the Champions Cup within six years transform into a club’s rating, which in turn develops into a rating of countries. According to the current rules, first six countries will be able to put three clubs for the next tournament, three following countries - two clubs each, and all the rest - one team each. At the moment Russia is ranked second behind Portugal. Thus, Russia will be able to represent three clubs in the main draw of the tournament. These will be three medalists of the Superleague.

A similar rating will be applied to women's beach soccer At the moment the best club in Europe is Zvezda from St. Petersburg.

BSWW bosses noted that they were inspired by the example of UEFA club rating fro, big football, but we should not forget about the big difference between the European Cups there and the Champions Cup in beach soccer. In big football clubs have financial interest in participating, in beach soccer they do not. So next spring BSWW will probably still have answer such questions as: “Who will come to the tournament if a champion or a medalist of a certain country is not ready to come to Nazaré?”

New restriction on foreign players is another new thing. Each team is now allowed to declare three foreigners excluding goalkeeper, and one extra, if he is a goalkeeper. It is important that there will be a rest day during the competition. Teams really needed it.

And it is also very important that participants of the European Champions Cup will be able to take part in a new club tournament - the World Cup of Champions, which will be held in Alanya (Turkey) in September. According to BSWW this tournament will be some kind of a club’s world championship. Format and conditions of participation are still under discussion. But one thing is certain: clubs from Europe will not be able to ignore the European Champions Cup to go directly to Turkey.