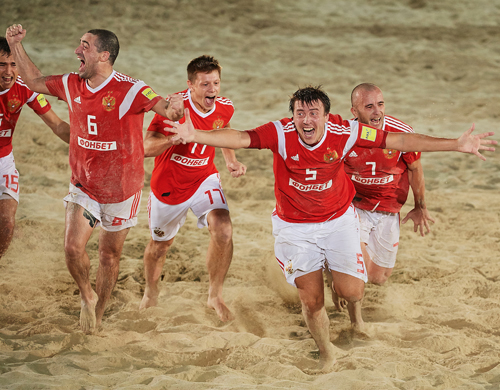 The final stage of voting for the Best goal of Russia-2018 begins! Vote together with the stars of the world beach soccer!

The most important thing in football is scoring goals of course! They bring the teams victory and respect as well as glory to those who scores them. No wonder fans most often love those players who know how to score. But fans love the goals themselves even more than the guys scoring them. Especially if the balls fly into the net nicely. But is there a perfect goal? This is the question the whole world of beach soccer will try to answer in the next three weeks. And its gonna be called “Best Goal of 2018 in Russia”. There are only eight contenders left. And there will be only one winner!

Who is it going to be? If you are reading these lines, you will be the one to decide!

BSRussia starts the final stage of the international vote for the “Best  Goal of 2018 in Russia”. Throughout the season fans voted directly for the best goals scored either in competition in Russia, or by the players of the Russian national team. There happened to be 14 of them. In semifinals these 14 goals were divided into two semi-finals (Russian and international). According to the vote results each semifinal had a pool of finalists with 8 goals. All of them could be seen as pure magic!

But there is only one prize! It will go to the author of the best, most spectacular, incredible and memorable goal of the year. Everyone is going to like it. Without any exaggeration, the whole world will be involved in the process - famous coaches, outstanding goal-scorers, experienced bosses, picky representatives of the press and all those who are considered to be absolute stars of beach soccer.

Next we will go through the concept. To make it as simple as possible we identified several categories of our voters:

Each voter will choose the best five goals from eight nominees and will sort them in order from 1 to 5. According to the expert, the best goal will receive 5 points, the second one – 4 points, the third one – 3 points, the fourth one – 2 points, and the fifth one – 1 point. Intermediate results will be held separately by the voters groups.

The most significant contribution will be made by the readers of BSRussia.com. The goal that gets the most number of votes will receive 25 points in the overall rankings, the second one – 20 points, the third one – 15 points, the fourth one – 10 points, and the fifth  one – 5 points. The best goal of the year, as you might guess, will be the one that gest the most points. In case of equality  the winning goal will be the one that was ranked first more. Results of the competition will be announced on New Year's Eve - December 31.

Voting is open. Let's go! So, here are eight contenders: