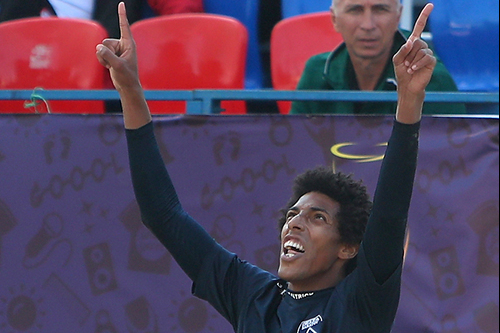 “I scored more than a thousand goals. But this one is definitely the best!”

On New Year’ Eve in Russia the voting process for the “Best Goal of the Year” in beach soccer was completed. The fight for the first place was hot and intriguing until the very last moment. At the end Tanger stole the victory from his competitors. Clearly it was a great year for him in Russia. He became the silver medalist of Russian Superleague with Delta and received a personal award.

Of course, we are all wondering how did Tanger like his first year in Russia. Will he return to our country? Will he play for Brazil? BSRussia addressed all these questions to the Brazilian himself. And he happily responded to all of them.

- Tanger, congratulations on winning «Best goal of 2018 in Russia» award! Did you follow the voting process? How happy are you to win it?

- Yes, I am very happy to win the best goal of the year award. I scored more than 1,100 goals in my career and it’s awesome to get the award for one of them!

- In your opinion, is this the most beautiful goal of your career? Did you score something like this before?

- I have scored some nice goals throughout my career, but this one without a doubt was the most most beautiful of my career.

- Most experts are sure that you took that shot on purpose in that moment However, some people think that your goal was random. Could you reveal the secret for us - did you actually mean to score like that?

- I am a defender, but I always wait for an opportunity to score. When I looked at the goalkeeper and saw that I was ahead, I did not think twice about taking a shot. It was an improvisation. But yes, I wanted to kick exactly like that.

- Could you tell us about your impressions of the first season in Russia? What surprised you the most in Russian Super League and in Russia in general?

- One of the things I noticed in Russian Superleague was the balance of the teams. They all have very high level. I also liked the structure of the league and the passion of the fans for beach soccer. I thought it would be super cold in Russia, but I was surprised the summer was crazy hot. Sometimes it reminded me of Brazil!

- You did not play in the first stage of Superleague in St. Petersburg because of the injury. You were sitting in the stands in the rain and you looked very unhappy. What thoughts came through you head at that moment?

- I will not lie, I was annoyed by the moment. I really wanted to play. But at the same time I was very happy to be in a very good team like Delta and playing in the strongest league in the world. I was happy for the opportunity I had. At that very moment I only thought of coming back to the pitch as soon as possible to help my teammates. Thank God I was able to do it.

- Some people were surprised that you were very successful in your first year in Russian Championship. Did you expect from yourself such a good performance in Russian Superleague?

- I'm happy that people think I surprised them in the championship. In a good way. I worked a lot before traveling to Russia, and my thoughts were about showing my skills and my qualities. All the glory goes to God. I could achieve nothing without him.

- What are your plans for next season? Are you going to play on Russia? If yes, on which team?

- I have certain plans for the next season and I'm still negotiating renewal of my contract with Delta.

- Did you talk to Brazilian national team coach Gilberto da Costa? Are you waiting for a call up from him?

- For sure, I'm waiting for this opportunity. It would be an honor to represent my country.

- What could you wish all Russian beach soccer fans in the upcoming year?

- I would like to take a moment and wish them a great year with many great games and beautiful plays beach soccer is full of.