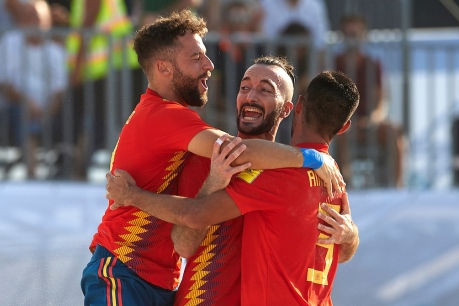 How to become the best team of the year without winning a single tournament? Ask Spain!

If you want to be the best - play more. BSWW ranking is all good except for the leader. Spain is the best team in the world. Seriously?

What team deserved to be called the best in 2018, in your opinion? Winner of the Intercontinental Cup - Iran? Euroleague champ - Italy? Or maybe powerful teams of Russia or Brazil? All wrong! If you choose to trust BSWW rankings, Spain became the best national team. Yes, yes, the Spaniards who did not win a single tournament and completely failed their first Intercontinental Cup. As it turns out, the secret of success is not the quality, but the quantity.

So, if you count points scored by the national teams in 2018, Spain will be the leader. La Furia Roja took part in five tournaments. Other teams could not even participate in four. Interestingly, Spain did not get any of the titles. The Spaniards began their year with the second place in Persian Cup in Iran, then lost to the Mexicans at the Bahamas Cup and took the second position in Mundialito. The greatest asset of Spain brought participation in the Euroleague final - 300 points. And the season ended with a big disappointment at the Intercontinental Cup, where they lost not only to Brazil, but also to the teams of the United Arab Emirates, Egypt and even to USA. Nevertheless, the sixth place brought them another 140 points. In total, they scored as much as 680 points. In the overall ranking Spain is still far from the leaders, but success in 2018 helped them to be back in top 10 and take the ninth position.

The second place in 2018 is occupied by Brazilians. Gilberto da Costa’s team took part in only two tournaments – Copa America (300 points) and Intercontinental Cup (270). In total, 570 points were collected. Top-3 concludes Iran that earned 100 points for the title in the Persian Cup and 450 points for winning the Intercontinental Cup. So Iranians won all the tournaments they participated in, and the Spaniards won none. Despite this, the difference between them is 130 points not in favor of Asians.

The Russian national team became fourth in 2018. Russia was only 30 points behind Brazil, and only 10 points behind Iran. The U-23 team was the first to score points for the Russian national team. Their victory over Turkey at the Inter Cup was rated at 10 points as a success in a friendly match. The fourth place in the Euroleague gave Russia 190 points, and silver medals of the Intercontinental Cup gave them 340 points. In total our team received 540 points in 2018.

It is interesting that the African Cup became the most “expensive” tournament of 2018. The thing is it had the status of the World Cup qualifier. Senegal won it and scored 470 points. It was the only tournament for them in 2018, so even such a huge triumph did not allow them to jump higher than the sixth position. Egypt found itself one place higher, because they took bronze medals at the African Cup along with the fourth place in the Intercontinental Cup.

With Italy situation is similar to Senega. Italians achieved a grand victory but in the only tournament of the year they took part it. 400 points for the Euroleague title provided them with the seventh place in the rating. Portugal is right behind them. They won Mundialito, became third in Euroleague and twice defeated Poland in friendly games. Nigeria and Morocco conclude the top-10 ranking of 2018. Americans were very close to make top-10 but missed it with only four points. Team USA performed well in all three competitions they participated in.

60 national teams got rating points in 2018. Half of them managed to cross the 100-point line. Very soon these points will begin to depreciate. The main reason for that in 2019 there will be way more major competitions. And tt is hard to believe that at the end of the year Spain will be number one again.