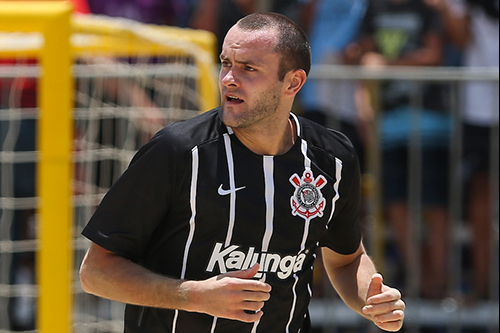 Mundialito without Krystall? How is it possible?!

Mundialito will be held in Russia for the first time this year. Lokomotiv and Spartak have already confirmed their participation. Krystall have not.

Beach soccer was originally planned as a particularly summer and sunny sport, which can only be played somewhere around the seashore . However, these stereotypes broke apart in Russia. First of all, the team from the land of snow won the World Cup twice. It also successfully hosts beach soccer tournaments. And not only during hot summer season but also in the frosty winter.

From February 27 to March 3 Mundialito is coming to Moscow. The tournament will not be held in Brazil for the first time in history, and will be played for the first time indoors. It all certainly looks intriguing. Presumably eight clubs will participate in the competition. From Russia we will see Lokomotiv and Spartak.

A tournament of this level is held for the third time in Moscow if we talk about indoor competitions. The first was the European Beach Soccer Cup held in December 2005. Russian national team reached the final and received their first awards in history. In February 2012, the best European teams again gathered at Luzhniki, and Russia then celebrated a victory.

And now for the first time beach soccer competitions will be held at Megasport Arena. It is a well-known location to hockey, figure skating and basketball fans. If the stands are full at Megasport, then we will talk able to talk bout record attendance for beach soccer.

“I consider Moscow to be an ideal venue for club Mundialito,” - Lokomotiv head coach Ilya Leonov said. - All over the world people know how well Russia can hold major sporting events. I am sure that we are going to see one of the best club tournaments in the history of beach soccer.  I’m waiting for the highest quality of beach soccer performed by the best Russian and foreign players. The game Spartak - Lokomotiv is very attractive for Moscow sports fans. It would be great to play in the tournament with Krystall. Plus, some of the best clubs in the world will come to visit us. I think that attendance is not going to be a problem. As far as I know, a lot of beach soccer fans are going to come to Moscow specifically for Mundialito”.

It is worth recalling that Lokomotiv is the current winner of club Mundialito, which was held in 2017 in Sao Paulo. Lokomotiv had another victory back in 2012. Vasco da Gama, Corinthians and Barcelona had one title each. Since 2011, Mundialito has been held five times.

“Spartak gladly accepted the offer to participate in the club Mundialito, because it is a great chance to test ourselves against the strongest rivals from around the world. We consider the upcoming tournament as an important stage of preparation for the season, while the task for Spartak is always the same - victory. I would not take a risk to say that we were invited to Mundialito only because of our recognizable brand. Spartak has become a strong club in recent years as last season we took the bronze medal in the best national championship.

The team has been training since October, playing in the Moscow Championship. This should help us look at least as good as our famous rivals. I invite Spartak fans to come to Megasport Arena and support our team.

Of course, we would like to see Krystall among the participants, because it is our current champion in Russia. The list of participants will be very smooth and strong anyways. Each club has a remarkable name in beach soccer and is capable of showing brilliant performance”, - General manger of Spartak Moscow Ivan Chistov told BSRussia.

List of participants is not formed yet. Moreover, it is not even clear how many clubs from Russia will play at Mundialito. Vice-President of BSWW Joan Cusco noted the possibility of a third club rom Russia. And it seems like he was talking about Krystall from St. Petersburg.

Obviously, Kristall is among the strongest clubs in the world right now. The main group of the team consists entirely from players of Russian and Brazilian national teams, and the head coach is Angelo Shirintsi. His name speaks for himself. Krystall has already grown into an independent brand in beach soccer and it is simply impossible to imagine Mundialito in Russia without the team from St. Petersburg.

It is interesting that Krystall accepted the invitation to participate in Mundialito in December 2018. The tournament was supposed to take place in Sao Paulo again, but something sent wrong. It will be sad if the Russian champion does not come to a much closer Moscow.