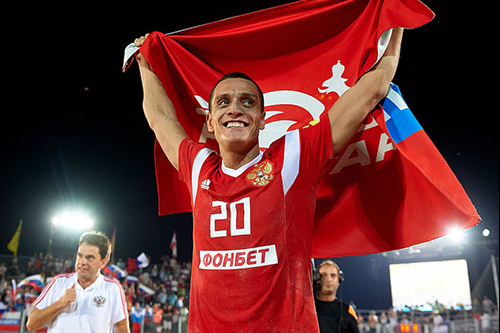 Nikonorov: my New Year's wish is to win the World Cup

Summing up the results of St. Petersburg championship led us to discussing a victory over Brazil, a new history of Lokomotiv, and his childhood

“When your team leads 5:0, it is always very tricky”

- Boris, congratulations on winning St. Petersburg Championship and becoming the top scorer. Could you tell us a bit more about the final?

- Thank you very much for the congratulations! When a team leads with a score of 5:0, you start feeling relaxed and that is when some errors appear which leads to the scoring chances of your opponent. But we remained confident and we knew that the game was still ours. It did not affect the final result. The score 8:4 is pretty convincing. We could speed up at any time, we controlled the match and always responded in the right away.

I would like to congratulate all the guys, thank you all very much! Congratulations to both Viktor Andrusenko, Dmitry Kupriyanov, and all those who played for Alliance, and of course our fans who watched the broadcasts. Thanks a lot to everyone!

- You won the championship of St. Petersburg with Zolotoy. Was it harder back then?

- In my opinion, yes, because this championship became weaker. I would like to say thank you to the guys who are engaged in PR of the tournament, guys who make broadcasts, photo reports, attract attention, increase the passion to beach soccer. They are great fellows. But from a sports point of view, the level of the championship has decreased. In 2016, there was Kristall playing, a very powerful Zolotoy, a very strong team City, and also Dynamo Moscow. Final game was amazing! That 2016 tournament was the best over the last few years.

- It became important for me somewhere after the third game. When I played my fifth match of the city championship, my main competitor Sergey Stepliani had already half a dozen goals scored. At first I didn’t even think about it, I just wanted to help the team to achieve the maximum result. But then I scored 17 goals in 3 games, the gap was minimal, and I thought: “Why not?” Of course, I tried to score as many goals as I could, although the main task did not change - to help the team win the championship.

If we talk about the final, I think anyone will lie if he says that he does not count goals in such games, especially if the gap in the race is minimal. When Stepliani caught up with me in the end of the game, I was even a little upset. Everything was so easy, and then we just relaxed more than we should, and the opponent created many chances. But I understood that I needed to score only one goal, and I did it! Many thanks to the guys for making great assists, especially to Nikolay Kryshanov, who gave me this crucial pass. He also gave me a pass in the competition in Turkey when I scored my seventh goal. That gave a chance to overtake Suarez in the scoring race. Kolya, well done (smiles)!

- Before you scored your first goal with a penalty, you changed the ball. Was it made for good luck or was there another reason?

- Nurik Mamadiev told me: “Look, the ball is torn! You need to change it”. I checked it up and the ball was really old, a bit ragged, so I decided to change it to a new one. It turned out really well – I scored. I guess it was for the best!

“The whole world was waiting for Russia to beat Brazil”

- Did your long-term partner Rogovsky ask you not to score on him so much?

- Well, all goalkeepers in Russia can ask me the same question (laughs). In fact, we have very warm and friendly relations with Maxim. I never meant to make him sad obviously. On the contrary, we always support each other, we help each other on the field. But there are no friends there really, it’s a war. You have to fight for your own team in the first place. All those who play in the opposite team are my rivals for 36 minutes. Using this opportunity, I want to say hi to Max and ask him not to get offended (smiles).

- Players from Yablochnaya took part in the celebration. Is this a continuation of that friendly atmosphere?

- Yes, because in the final two teams of friends played a game. Many of us played in the same team called Podvodnik in 2014. This is Valya Mikhailov, Sergey Stepliani, Max Rogovsky, Kryshanov brothers, Mamadiyev, Semyonov, and me. Basically the whole team got together, so the celebration was held in a friendly atmosphere.

- You were limping yesterday during the match. What happened?

- In the middle of the first period, Valentin Mikhailov accidentally hit my leg with his knee. It was impossible to freeze it. I know that for sure because I had the same issue before. Guys brought me a warming up gel. I felt better, but the pain still remained. Yesterday I could barely walk home, and today the pain is terrible. I can not step on my foot literally.

- How long will this pain last? How long does it usually take to recover?

- I will have to suffer at least five more days. It is said in Russia that it will heal before you get married, but I hope it will get better before the New Year (smiles).

- What are your plans for the coming days and weeks?

- Pretty much self-preparation before the New Year and a few weeks after. Then some time in January we are already planning to get together wih Lokomotiv and start training for the next season. In the meantime, I will be attending NovaArena, swimming in the pool, goin go to the sauna, gym. I will train, but in the "light" mode - I need to relax both mentally and physically, because last season was hard for me, especially mentally. There were many injuries as well.

However, I can say that I am proud of myself. I coped with everything mentally and physically. I came back from the injury and reached the Russian Cup final for the first time in my career. I won Alanya Cup, reached the final of the Intercontinental Cup. I am particularly pleased with the fact that we won the our best rival - the Brazilian national team. And I scored goals in almost all games. At the end of the year I also won St. Petersburg championship and the title of a top scorer. For me it was the icing on the cake (smiles). I am pleased with how this year ended, almost all goals have been achieved.

- That is an easy question for me. The worst moment was when I got injured in a game against Azerbaijan. And the best one was an epic victory over the Brazilian national team. Our fans were not the only ones who waited it so bad, the whole world was waiting! And it's very cool that we did it, and I took a big part in it. I would like to thank the whole team for doing that - we were a real sports family, we fought for each other. It was really our day! I am very happy that I had a chance to go through it, and I am sure the memories will last a lifetime. I can only hope for more such days for the Russian national team in the coming season!

"We will write a new story with Lokomotiv”

- In the current off-season Lokomotiv Moscow has changed a lot: Anton Shkarin left the team, Kryshanov brothers joined Loko. How will it all affect the team?

- It is hard to predict. I think it’s useless. I do not know what will happen next year. Let’s wait and see. Departure of Anton Shkarin is a big loss for Lokomotiv. He is a club legend, he played here from the very beginning. But everything comes to an end, so Anton moved on. You need to respect his decision, because he is a great player and an outstanding professional. He takes such a good care of his health. He is 36 but looks like he is 20! I really respect him for that. I want to wish Anton good luck and success in his new team. I am sure he will play soccer as long as he wants to!

And we will move on ourselves. The last world champion left the team, so we will create a new history. Let’s turn over the page and do it. Kryshanov brothers will help us for sure. This is a great transfer, I really wanted it, because they are my great friends. They helped me a lot when I moved to St. Petersburg. I am very glad that we are together again. They are very strong players. Also Nurik Mamadiyev will play for us. I believe that we can really perform very successfully this year. When quality foreign players join us, we will have every chance to fight for the highest places in all tournaments. In my opinion, we have a great team.

- Next season will be extremely tough for the national team. Is there a way to manage it perfectly?

- It’s a good question (smiles). This will definitely be a very difficult year, since all tournaments are very important. But, honestly, I look forward to 2019. After all, we live and train just to play in such important matches, where you can prove yourself, and your team can achieve maximum results. World Cup, World Games, European Games – all these are just crazy tournaments. I dream about winning all tournaments in general, including the most important one – the World Cup.

- Will you make this wish on New Year's Eve?

- One hundred percent! This is my childhood dream - to become a world champion with the Russian team. I used to dream about it in big football and now in beach soccer. Nothing has changed since then. This tournament stands out for me. I want to fulfill my dream. Now it is actually not only a dream, but a goal. An we will do everything to achieve it.

- What would you like to wish BSRussia’s readers and beach soccer fans in 2019?

- First of all, I would like to wish all the fans to stay healthy - this is the most important thing! I wish everyone to achieve maximum results in whatever they are doing. I would like to thank all the fans for such a cool support at stadiums. We always feel it, and we really appreciate it. Hopefully more people in 2019 will discover beach soccer for themselves and will cheer for the Russian team!

And the most important thing for everyone is to be happy. I really want happiness to come to every home in the world!