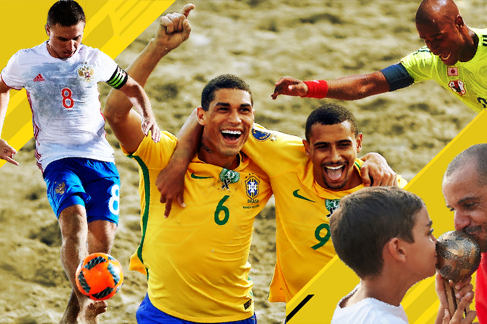 BSR Weekly Didgest. Angry Brazilians and hero of the day from Iran

Two weeks ago the world of beach soccer was quietly relaxing and counting days before the start of the season. But then suddenly best beach soccer players found out that they were going to Moscow. Short deadlines of Mundialito led to the fact that last week we got a lot of different news about the tournament. First of all, the full list of participants became public, then there was a draw, and then competition schedule was announced. News from participating teams came along with along that. Unfortunately, Lokomotiv striker Boris Nikonorov will not perform in Moscow.

In spite of all the importance of Mundialito there were other new that managed to compete with it in the information field. Of course we talk about Novator. This team decided to skip 2019 season. The management refuses to discuss the reasons for changing the course. But we already know that Vladimir Raskin will continue his career in Spartak, and a big group of players including head coach Emil Dzhabarov will represent Krylya Sovetov in 2019.

Obviously Mundialito and situation around Novator were not the things happening in beach soccer. The start of the season is getting closer. Let’s have a closer look on what is going on around the world.

Change of “regime” in Uruguay

Winter in Europe is very different from the one in South America. Conditions there are really all right right now. And we got the name of the new champion in Uruguay. Racing won the second tournament in the preliminary stage called Clausura. This allowed the team to fight for the title with the winner of Apertura and the current champion Bella Vista. Racing won the final game with a score of 7:6. Together with the long-awaited trophy, the new champion got the opportunity to play at Copa Libertadores-2019.

Asia is particularly active if we talk about national teams. It is understandable, because Asian qualification for the World Cup starts in less than a month in Thailand. Practically all participants were having training camps these days in order to get ready and fight for the World Cup vacancies. Iran takes this preparation very seriously.

Marco Octavio’s team did already the third camp in 2019. But at the same time Iranian players have time not only to work, but also to relax. After one of the training sessions, the team celebrated the 35th bithday of the legendary goalkeeper Peyman Hosseini at the gala dinner, as well as his young fellow colleague Ali Darwish.

Japan national team will also go to Thailand to fight for place at the World Cup. From February 21 to 24, the best Japanese players under the leadership of Rui Ramos will do their prepatations in Okinawa.

The third best team of Asian beach soccer is the UAE team. They will prepare for the Asian Championship at home. The Arab squad is training in Dubai, where they will hold three friendlies with a strong Belarus team.

Team Portugal is also trying to stay active. They also do not need to leave their homeland to train on the open sand. Portuguese training camp started in Sesimbra. Mario Narsizo called up both experienced leaders and several promising young players. It is clear to everyone that rotation will be the key in a very busy 2019 season.

Argentina and Uruguay national teams held a series of friendly games - two in Uruguay and two in Argentina. Interestingly, every time the winner was the team that played at home. In addition, friendly meetings between the women's teams took place in Argentina. It should be noted that these were the first official matches in history of the women’s team Argentina.

In the same boat with Krystall

In Russia and Europe many people were surprised by the absence of Krystall in the list of participants of Mundialito-2019. In South America journalists and experts were outraged by the non-participation of Vasco da Gama - the reigning champion of Brazil, two-time winner of Copa Libertadores and the winner of the club Mundialito. "The organization responsible for the selection of participants does not follow the criteria of the rating, but invites those clubs with which it makes deals," the report said on the official website of Vasco da Gama. The current winner of Copa Libertadores is the Brazilian Vitoria, and Vasco da Gama tops the Brazilian and South American club ratings. But Brazil in Moscow will be represented by the vice-champion of the country Flamengo.

Nevertheless, Vasco da Gama is not devastated and continues its own development path. The current Brazilian champion in partnership with the Japanese top-team Tokyo Verdi invited Keisuke Kawaguchi for an internship. He will train and gain experience with beach soccer stars during the month. Exchange trips to Japan are planned in the future. By the way, the main ambassador of Japanese-Brazilian cooperation Ozu Moreira performs for Tokyo Verdi.

Finishing flying over the world of beach soccer, let's take a look at Africa. From June 14 to 23, the first African Beach Games in history will be held on the island of Sal in Cape Verde. Beach soccer tournament will be qualifying for the World Beach Games in San Diego. Recall that Cape Verde already had experience in international beach soccer competitions. In 2016 and 2017, the Sal Cup was held with the participation of the Spaniards, Portuguese, English and Germans, as well as the Cape Verde national team itself.