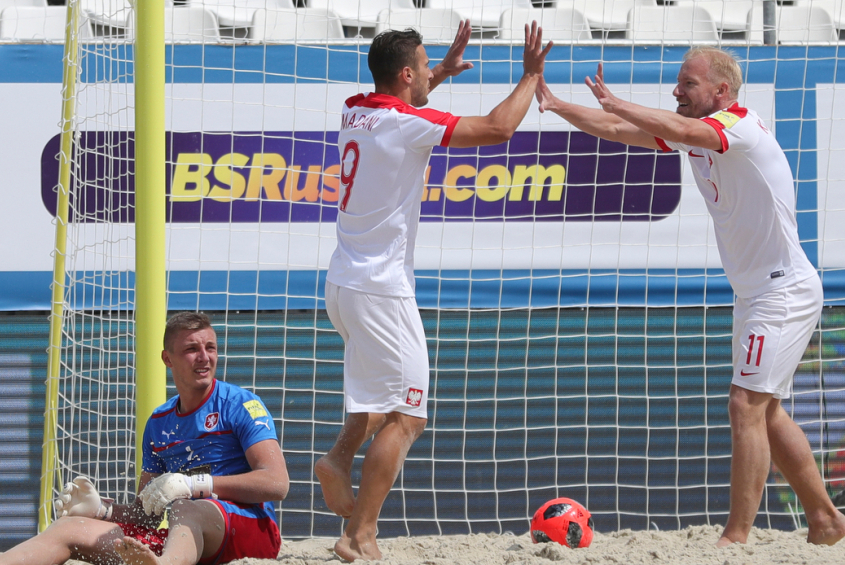 “A year ago I was cheering for Poland in Luzhniki fan zone in Moscow. It's amazing!”

Polish striker Karim Madani came to Moscow as a fan in 2018, and now he leads his team to the World Cup.

36 minutes of game in beach soccer may seem like forever for those who play this sport. Polish national team controlled the game with Czech Republic for the most part in the European World Cup qualifying tournament in Moscow, but allowed a goal when there was only four seconds left on the clock. Three points seemed to be gone. However, Yakub Yesinovski managed to score another goal before the whistle and made Poland happy.

But the main hero of game was Karim Madani. Number nine from Polish team scored the first goal of the tournament and recorded two assists. He shared with BSRussia.com his expectations from this tournament and told amazing story how he spent last summer in Russia.

- Karim, congratulations on your first win. What are your emotions now after such crazy last seconds?

- Thank you for your congratulations. We were jn a good mood before the game, but there were some problems with the preparation. We wasted a lot of chances, and paid for that in the end. Rivals were able to score twice and tie the game. Fortunately, the game still ended in our favor. When we scored in the very end, it really was an emotional moment. You can call us lucky, but the main thing is that we made a very important first step. We have a new team with five or six new guys. It is not easy, but we are trying very hard.

- Today you are a hero of the day. Are you happy with your game?

- It does not really matter. Goals and assists will not make you happy, if your team does not win. I am not fully satisfied with my game, although I was not too bad. I am sure that we will play much better in the next game as a group.

- What can we expect from Poland in next games?

- Wins! Trust me, we will win. We are getting more confident and and will make less mistakes.

- We really want this. Poland differ from teams like Italy, Portugal, Russia and Spain that go to almost every Word Cup. Our roster changes a lot, and we have to prove each new tournament that we deserve to be on top. Sometimes team Poland does not look good at practices and in first matches, but eventually we are getting the confidence. If I can take part in my second World Cup, it will be the dream come true.

- Bohuslav Saganowski made a great contribution to the success of Polish national team in Jesolo.  He retired after that. How did it affect the team?

- Of course, it was much easier for us to win with Saganowski (smiles). He is a true legend of Polish beach soccer. Now we do not have Saganowski, but there are 12 good players who give their best to be successful. We are strong as a team, not as individuals.

- I do not like Russian weather. This is the second time I play here, and for the second time it is constantly raining. Organization is top-notch though. Beautiful stadium, friendly atmosphere. If something needs to be done, it is done. Too bad that the organizers can not affect the weather (smiles).

- It's great! I will be happy if that happens. Russia is doing an excellent job with organizing major tournaments, and the World Cup will be no exception.

- World Cup in Poland - is it at all possible?

- We would like it to happen very much. But right now we are hopelessly hoping for at least a Euroleague stage. It is all money related. There are many kids and youth's tournaments in big football in Poland, a lot of futsal competitions, but with beach soccer it is a lot more complicated. We hope things will get better within time.

- Last year Polish national team played at the World Cup in Russia in big soccer. Did you follow this tournament?

- I even came to Moscow as a fan! I didn’t manage to get to the stadium, but I was in the fan zone here in Luzhniki. And now I play next to this beautiful beach soccerl arena. It is amazing and very cool!