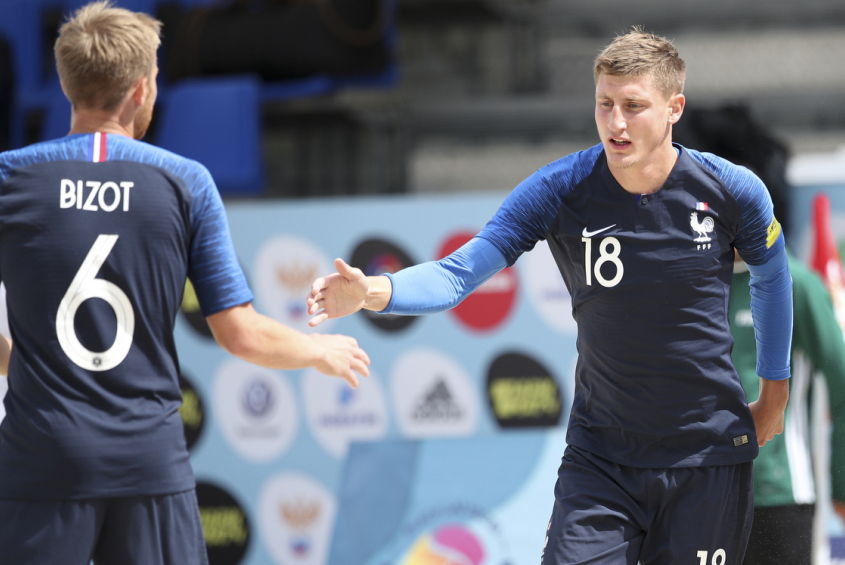 Frenchman Victor Angeletti is pleased with the start of Moscow qualifier. He is inspired by a big dream and by 2018 FIFA World Cup.

French team got two victories over Norway and Moldova in the first two games of the European World Cup qualifier in Moscow. This success inspired the French team to fight team Portugal and then fulfil their biggest dream – become a part of the World Cup.

- Victor, could you share your emotions of the first days of the qualifying tournament?

- You know, this is my first time in Russia and, despite the weather, it is full of positive emotions. Moscow is a beautiful city, there is an excellent beach soccer stadium. I like everything, to be honest. I am very happy that I had a chance to play beach soccer in Russia. I know that in 2021 the World Cup may be held in your country. I would be happy to come here with the team in two years.

- It started to rain during the game. Did it make things more compicated?

- I used to playing in the rain. I'm from the eastern part of France, where it rains regularly. Clearly the sand becomes heavier, there is more fighting for the ball, and you need to be more physical in general. But for our team it was not a problem.

- The French team won two games at the start of the European qualifying tournament. Are you satisfied with this result in Moscow?

- The first game was not easy. We didn’t practice as much before the start of the tournament as we would like to. So we had to spend some time to get used to the tournament, but we managed to do it.

It was much easier to play in the second match against Moldova. We improved a lot as a team, we scored more than the day before and in general we are quite happy with the way we played.

- The beach soccer field is very close to Luzhniki stadium, where just a year ago the French team won the World Cup. Does that motivate you in a certain way?

- Yes, every time I remember about the victory of the team in the World Cup, I am filled with emotions. Now we are here in Moscow and we are trying to do the same thing our big football team did last year. So far we need to move step by step and make sure we make it to the World Cup, but our motivation is to be as strong and successful.

- The French team has not been at the World Cup for more than ten years ...

- Is it more of a dream for you or something real?

- This is our dream, of course, but I think it’s realistic to fulfill it. We really want to achieve this goal in a few days.