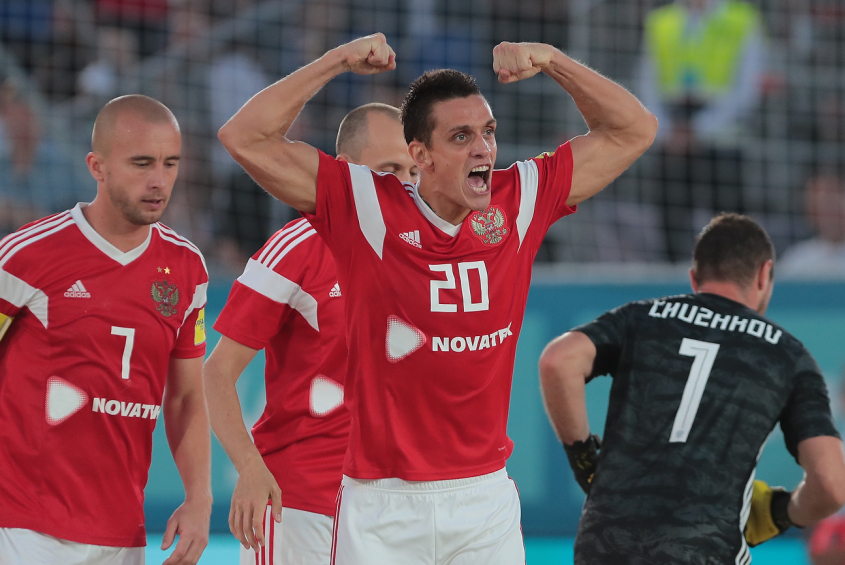 “Other teams are afraid of Russia again. And that is fantastic”

Boris Nikonorov had no doubts Russia would qualify to the World Cup.

Team Russia won all seven games at the European World Cup qualification tournament in Moscow. And what is more important, Russia did not give opponents a single chance to win. Victory over Spain led Mikhail Likhachev’s team to the World Cup.

Russian striker Boris Nikonorov shared his emotions with BSRussia.com and explained what he had do go through on the way to success.

- Boris, Russian team is doing amazing here! Are you overwhelmed with eomtions?

- I'm very happy and extremely glad that we beat everyone with confidence and achieved our goal. There was a great atmosphere the whole week. We were playing at an amazing stadium in the very center of Moscow! We did it for our incredible fans who came to support us in any type of weather. Many thanks to everyone who came to the stadium and who watched our games on TV. And, of course, many thanks to our families and friends. You guys are just awesome!

- Is this the happiest moment in your career?

- For sure! It is the most significant one at least. We all play the game and we dream of winning the World Cup. But you need to qualify first. And we did a great job accomplishing this task.

- Were you nervous before the game vs Spain?

- Not at all. At the beginning of the tournament I said that was am absolutely sure in each and everyone on our national team. Two years ago at the Intercontinental Cup I said that someone would beat the Brazilians once, because all the series and sometimes. I also said that it could be Russia. And next year at the same place in Dubai Russian team defeated Brazil (smiles).

- We are waiting for your forecast for the World Cup in Paraguay then!

- No, no, no, no (laughs). In fact, many teams will have a chance there including us. I know that the Russian team will have a great opportunity to get the title back. I believe in our players, in our coaching and medical staff, in our fans and our country.

- You did not play for the national team in the first part of this season due to a serious injury. The fact that you managed to come back to the sand makes this success even more pleasant, doesn’t it?

- I got this knee injury in January. I was not able to walk for four months. So now I'm just happy that I am back with the team and that I could help them to qualify to the World Cup. Many thanks to the doctors, who supported me all the time. Surgery was not an option, because I could have missed almost a year. Thank God we made the right choice. It’s all done for the best.

- How do you motivate yourself to win the final vs Italy?

- Frankly speaking, we did our main task even two days ago when we beat Azerbaijan. We knew that all we had to do is not to be completely destroyed by Spain. But we still went on the sand and played for a victory. When you play at home, you have to win. We didn’t even think of losing to Spain. We will have the same motivation against Italy. We want to do it for the fans.

- You did not play at the European Games, where the Russian team lost to Italy twice. Does the team have a special desire to take revenge in the final?

- The motivation will be huge. I had a big desire to take revenge on the Swiss for defeat in the Euroleague  Superfinal of 2016, when they beat us on penalties and left us off the final game. I can say the same thing about Spain and Italy. They beat us before but now it’s our turn to win.

- What were your feelings when you went out on sand and saw the full stands in a game against Spain?

- It was fantastic (smiles). I would like to thank every person who came to support us. Everyone added to the overall atmosphere.

- Do you think Brazil is scared of Russia again?

- One hundred percent! They started shaking before the game at the Intercontinental Cup. We lived in the same hotel, and I saw that they were afraid of us. I know a lot of Brazilian players because they play in the Russian Super League, so I can notice important details. Other teams are afraid of us, and this is fantastic. When we are in excellent shape, we can beat any opponent. This is just the beginning!