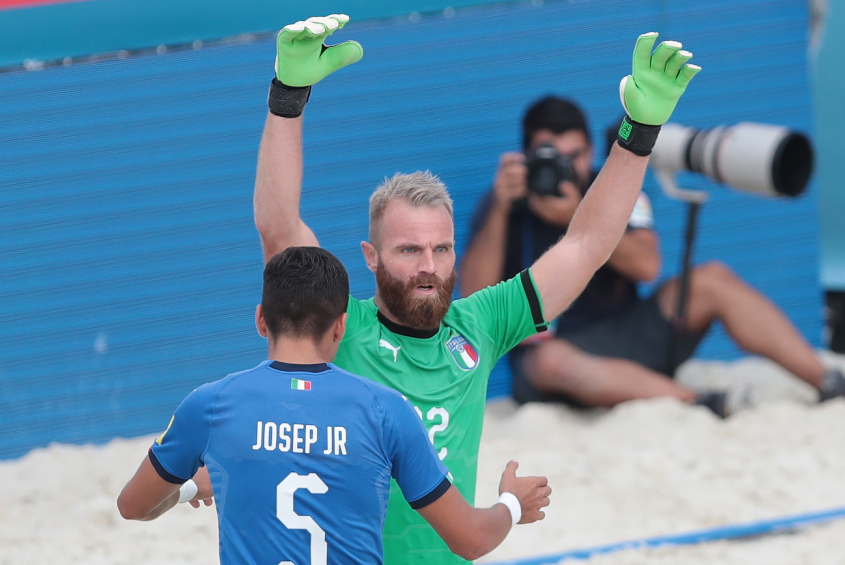 Italian's goalkeeper Simone del Mestre compliments his team for the game vs Poland and admits he might play in Russia once again.

Italian national team started with a victory over Poland in the second group stage of the  European World Cup qualification tournament in Moscow. The most important goal for Italy was scored by goalkeeper Simone Del Mestre.

BSRussia talked to Simone after the game. He shared his emotions with us and also noted there is a chance he could play at the Russian Cup in Sochi this year.

- Simone, Is there a feeling that Italy got closer to Paraguay today?

- This is a big step for us in terms of getting tickets to the World Cup. A few days ago we played Poland in the first group stage, so we knew what to expect from them. I think we had a good match. Most of the time we controlled the ball and scored goals at the crucial parts of the game. We needed to win to take first or second place in this very difficult group.

- It is fair to say that today you had more problems against Poland than a few days ago?

- Yes, it was a more difficult game for us. Previous match was not particularly important. Now the fight for the World Cup is on, that is why the Polish team showed that they really wanted to win. And, of course, unlike the first game Gori and Marinai helped us today. They are very important players for our national team.

- There is a chance that the victory over Belarus will give you tickets to the World Cup. Is going to put more pressure on you?

- We hope that two victories in three games will be enough to get to the World Cup, but this is beach soccer, so you can not be sure of anything. The most important match is the next one as always. We concentrate only on the game against Belarus from now on.

- Many believe that really 8 best European teams qualified to the second group stage of this tournament. Would you agree with that?

- Yes. These eight teams and also Ukraine are really the strongest teams in Europe right now.

- In this regard, do you think the existing formula of the qualifying tournament works fine?

- I do really know all the details of these regulations. If strongest European teams fight with each other for the right to go to the World Cup, I guess that's a good thing. We are here to play with any teams qualify to the World Cup.

- You played for Russian team “Crystal” at the European Cup. Could you tell us about this experience?

- I was impressed with the organizational level of the club from St. Petersburg. Management, employees, players were very professional. Unfortunately, we were unable to win the tournament. We lost one match on penalties and got relegated. But overall it was a terrific experience for me.

- It felt you were a little bit unlucky both at that tournament and at the European Games in Minsk. Do you agree?

- Yes, especially in a game against the Spaniards at the European Games. It all went wrong in the last minute, when Spain got a chance to shoot from the free kick, and Antonio scored a fantastic goal.

- Is it difficult to recover from such defeats mentally?

- I have no problems with that personally. The whole team is very strong mentally. We know that whatever happened can not be undone. So you need to forget about it and move forward.

- Is there a chance that we will still see you playing in Russia soon?

- We talked with the management of “Crystal” after the tournament in Nazaré. We were pleased with the job that we did together, but the team already has two very strong Russian goalkeepers. And I am also a foreigner. So I do not know about “Crystal”, but there is a chance I will play at the Russian Cup. But I can not tell you the name of the team just yet (smiles).