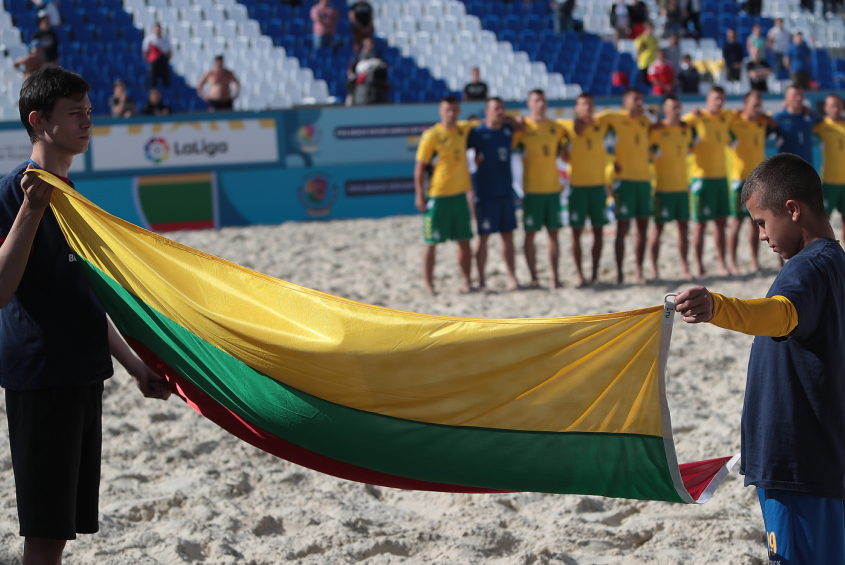 "Beach soccer is my only job". A guy from Azerbaijan is living his dream

Lithuania gave him family and a dream job. An amazing story of Sahib Mammadov that looks more like a fairy tale.

The Lithuanian team played two descent periods against much more experienced team Switzerland, but they failed second period and could avoid a pretty tough loss. Anyways, Lithuanians make their first steps in a new era with a new coach and new concept of the game.

People who follow beach soccer closely could recognize the new head coach of Lithuanian team. It is a former player of Azerbaijani team Sahib Mammadov. His story of success in beach soccer is really amazing. And here is why.

“I met my wife in Turkey”

Sahib was born in a small town in Azerbaijan and started playing beach soccer when he was 22. He also played some tournament in Turkey and that is why he met his future wife. Sahib told BSRussia.com in more details how it all happened.

“It’s true. I met my wife in Turkey. She is from Lithuania, so we decided to live in this country. We already have a little son growing up. I have been living in Lithuania for three years now. Last year I played at the Lithuanian Beach Soccer Cup, and after that I was invited to become the new head coach of the national team. It came as a big surprise, we had long discussions with the federation, and then we signed a contract in April”.

Nothing but beach soccer!

Apparently, coaching is his only job. Mammadov obviously can not reveal his salary but admits it is good enough to make a living. Few times a year he travels to Turkey to play some more beach soccer, but that not his main source of revenue. A lot of beach soccer players must be really jealous right now as they have to combine beach soccer with other jobs.

“In 2-3 years Lithuania will be much better”

He started playing beach soccer 11 years ago with no experience at all. But together with team Azerbaijan they achieved a lot. Azerbaijan is now a solid competitor. Sahid believes that he can repeat this success with Lithuania.

“The most important tournament for us this year is Euroleague stage in Catania. But we have long-term plans. I think in two-three years we we achieve great progress. Of course, we have some problems in finding players in our country. Most of them are amateurs, they have to work somewhere else, and it is not good. People love soccer in Lithuania, but they are pretty skeptical to beach soccer. Our goal is to change this perception. And I know how to do it. I’m very happy that I got this unique chance to make a difference”.

“Why can’t we do what Russia and Belarus did?”

Mammadov’s team lost 1:8 to Switzerland yesterday. They probably won’t make it to the World Cup this year, but the new head coach sees bright future of Lithuanian beach soccer.

“When I signed the contract, I said that nearby countries like Russia, Belarus or Poland have good beach soccer teams which play in Division A. Why can’t we do what they did? Why not Lithuania? We can be on top too. Just give us some time”.