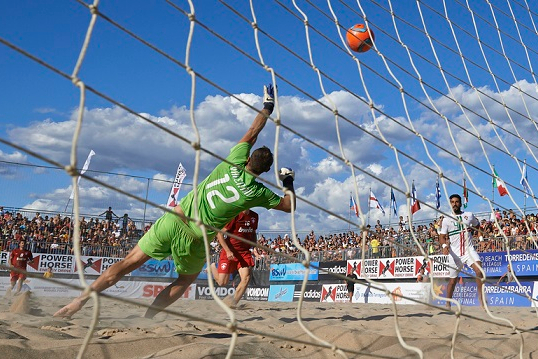 BSRussia remembers the best goals from the 2019 FIFA Beach Soccer World Cup and looks forward to a spectacular renewal this year..

The beauty of Beach Soccer is in the goals. In Paraguay, teams set a World Cup record. Two hundred and eighty six times, the packed stands exploded in applause. The leading goalscorer at the tournament was Gabriele Gori, with 16 goals. Second place was shared by Emmanuele Zurlo and Fedor Zemskov (10 goals each). With such a scoring festival, choosing the best goals was not an easy task. BSrussia remembers the ten best shots of the 2019 FIFA Beach Soccer World Cup.

In this match, the Italian striker made a serious claim for the top scorers title, putting five goals past the Mexicans. His third goal was especially memorable. A long-throw from the Goalkeeper and a spectacular overhead kick first time, from an acute angle, saw the ball fly into the bottom corner. A true classic of Beach Soccer.

No list can be complete in Beach Soccer without including a Goalkeeper. The Brazilian Goalkeeper led his team forward in the first period, scoring a masterpiece. Maxim Chuzhkov, in the opposition goal, was powerless to stop his shot. We will return to this game later.

It's the second goal of the powerful Senegalese striker in this game that caught the eye. Surrounded by Ivan Konstantinov, Ilya Savich and Igor Brishtel, standing with his back to the goal, what could he do in such a tight situation? A bicycle kick was his answer. Valery Makarevich was powerless, and the Africans increased their lead to a two goal advantage.

An amazing strike from the Japanese Brazilian from a free kick. The ball was placed almost at the corner flag near his own goal. Usually, such attempts are only a threat in the case of a low shot. But Ozu sent a “rocket” to the far corner of the goal, which flew through the air. There's no description you could use to give justice to such a strike, it needs to be seen to be believed!

In this match, Noel scored twice. His second goal was especially pleasing to the eye. Ott accurately shooting inside the near post, Elliot had a clear sight of the shot but was still helpless to prevent it hitting the back of his net, a great strike.

The Brazilian scored a hat-trick in this game. The pick of the 3 was the second goal. Rodrigo received a pass and hit a shot high into the net. The shot was hit with such power, the Nigerian Goalkeeper didn't stand a chance, even though the shot was straight down the middle of the goal. “He couldn’t defend that” - there's simply nothing to add to the commentator's phrase.

The Paraguayan did everything himself - took the ball on his side of the field, turned away from his opponent, moved to a convenient position and shot to the left corner of the goal. Americans could only stand and admire.

The opening match for both teams at the World Cup turned into a real shootout, where the Swiss celebrated the victory. However, the goal of the US captain, Nick Perera, also became a real decoration of the game. Seemingly standard play for Beach Soccer, standing with your back to the goal, and shooting with a bicycle kick, but the ideal trajectory of the ball seen it fly into the postage stamp, which really confused the Swiss Goalkeeper. He was powerless to help his teammates.

The Italian forward became the true hero of this quarterfinals, scoring three times. He also scored the winning goal in the last second. We can only envy the foresight of the commentator, who, after the first of Zurlo’s goals, said, “It is a player who can bring Italy to the semi-finals”. It was Zurlo’s first goal, which was especially beautiful. The combination began with the pass from Francesco Corosiniti. Emmanuelle took the ball with his head, not letting it hit the sand and then found the moment to perform an overhead kick, four seconds of pure pleasure from the individual.

Another historic victory of the Russian national team was over Brazilians; this victory was strong-willed. Kirill Romanov scored twice in this match. First, he made the game level with a shot over himself, and then he created a real masterpiece after Dmitri Shishin's shot from the centre of the field. Kirill was in front of Mao, blocking his view, with his heel, he sent the ball into the net, completely disorienting the Brazilian Goalkeeper.