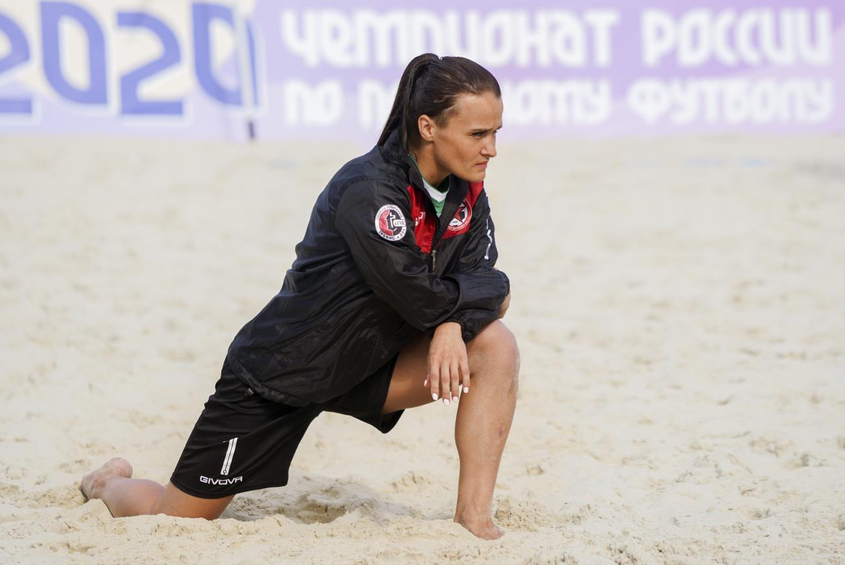 Akylbaeva: "I try to get the most out of every day"

An interview with a soccer player called by BSWW experts "the embodiment of beach soccer".

Before the upcoming season, the goalkeeper of "Zvezda" and the Russian women's national team Anna Akylbaeva was included by experts from the Beach Soccer Worldwide (BSWW) in the "5 to watch" list. Moreover, famous coach Paula Sanz called Anna "the embodiment of beach soccer". We could not ignore such a bright moment and asked Anna about her emotions from such recognition, discussed the past season, competitions in women's beach soccer, plans for the future, and expectations from the FIFA Beach Soccer World Cup 2021.

— Anna, first of all, I would like to ask what needs to be done to get such recognition among the world's leading experts? How did you feel when you were called "the embodiment of beach soccer"?
— It was a big surprise for me. When I first saw the magazine's cover on BSWW Instagram (Beach Soccer Worldwide), I didn't even pay much attention. But, looking closer, I noticed the "Zvezda" emblem, and only then — my face. At that point, I didn't know yet why they printed my photo, but it was already lovely.

After reading the article, I was shocked for a while. The words "beach soccer embodiment" from the world's leading experts impressed me immensely. Congratulations from parents, friends, acquaintances, subscribers immediately rained down. They said that I deserved it. What is here to hide? I was happy. But, at the same time, I realized what responsibility fell on my shoulders. After such words, I now cannot afford to "lose my face". So I have to train even harder to jump to the next level. Physically, technically, psychologically. 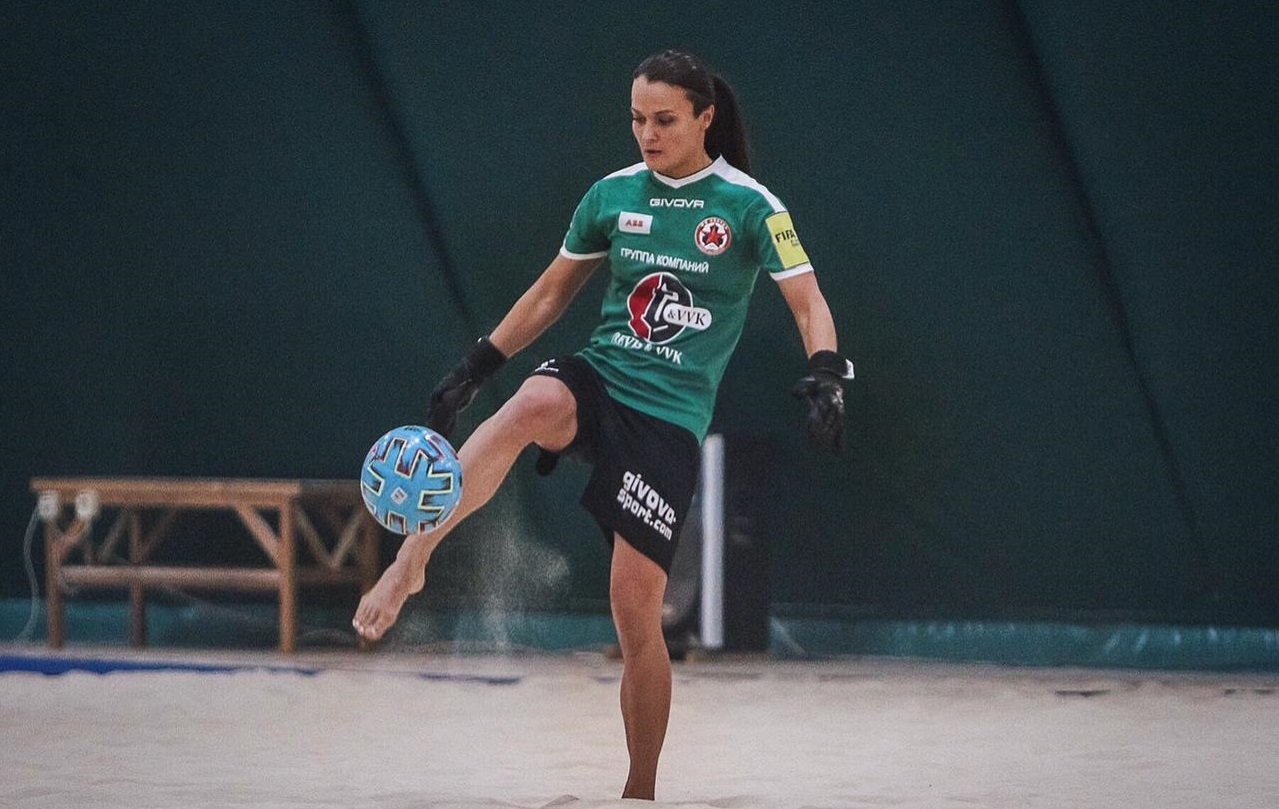 — Your Instagram account has a massive amount of photos and videos from training. Can we say that now your life is entirely devoted to sports?
— Yeah, every day of my life is about sports. Someone might say that I'm missing something interesting in my regular life because of the constant training. Maybe, but I have a global goal. Whether I can achieve it or not — I don't know. But I will try to do the impossible to get the best of it. For me, there's no such thing as "I can't", "I'm not able to do it", "I don't want". This kind of temper I got when I had been skiing professionally for 12 years. I learned to endure, concentrate, choose the tactics, analyze the opponent's actions, react on time, and abstract at the right moment.

During a training session or a match, nothing else exists. There is only you and the task. Everything else takes a back seat.

But at the same time, I have beautiful photos in evening dresses. It is the other side of the coin. You will rarely see me in these clothes in my life. Mostly I get casual clothes or sports equipment. But even if I'm a soccer player, a goalkeeper, I have to stay a girl and sometimes indulge myself with beautiful clothes or pictures. Well, when a girl is also a bartender, who knows how to make cocktails and serve them beautifully, it's excellent (smiles). 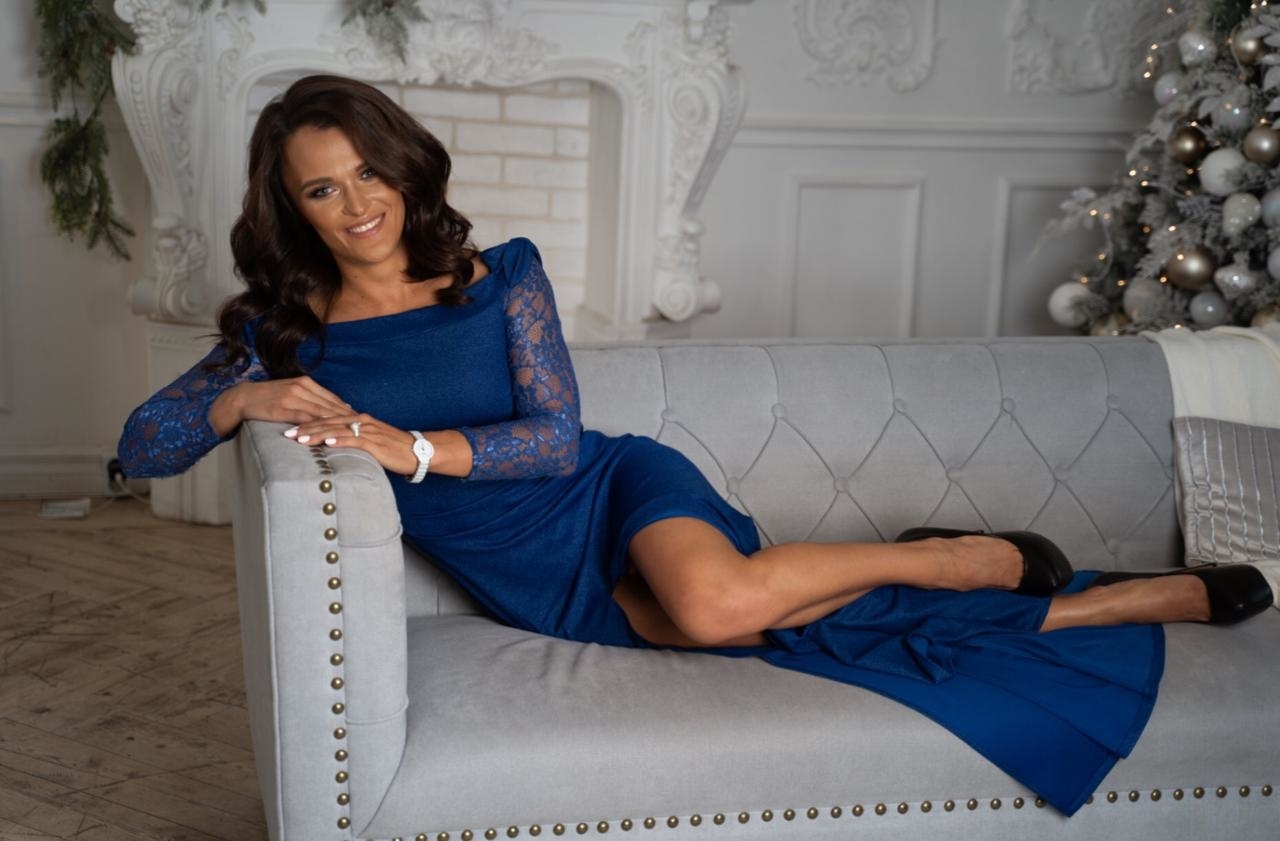 — 2020 was the weirdest year for beach soccer and sports in general. What are your impressions from the past season?
— As people say, "The season is over, and thanks to God". It's been a tough year, mostly psychologically. I didn't stop training, even during the period of total isolation. I found all sorts of ways to keep my body on its toes. When team training was allowed, it was hard for me. No one knew what we were working for, what we were preparing for, whether we were going to compete or not. There were even questions during the competition: will we finish the tournament or everything would be shut down.

The sense of constant waiting has personally drained me this year. Physically, at the end of the season, there was a sense of underplay. The numbers speak for themselves. Instead of the usual 40-50 matches, I ended up with only 16

— "Zvezda" twice a season in decisive matches had defeats with a very unusual score of 0:1. Comparing these meetings, what was the reason for those defeats?
—  Although both matches ended with the same score, I can say that it was completely different games. It's no secret that we flew to Portugal for the cup. Everyone realized perfectly that we need only a victory in the match against "Caceres". The game started according to our scenario. We had the advantage, but the Spaniards got one "nine" shot, and then they put the "bus", which we could not hack, despite all the steps that our coaching staff made during the match.

In the final against "Lex", there was a similar double-edged struggle with moments at both gates. But, unlike the game in Nazare, our coaches did not make any amendments after we missed the ball. I cannot say what the reason was, and I have no right to discuss coaching decisions. Another offensive 0:1, from which each player of the "Zvezda" made the necessary conclusions. I hope these defeats will make us angrier in a sporting manner, and we'll try not to let that happen again. 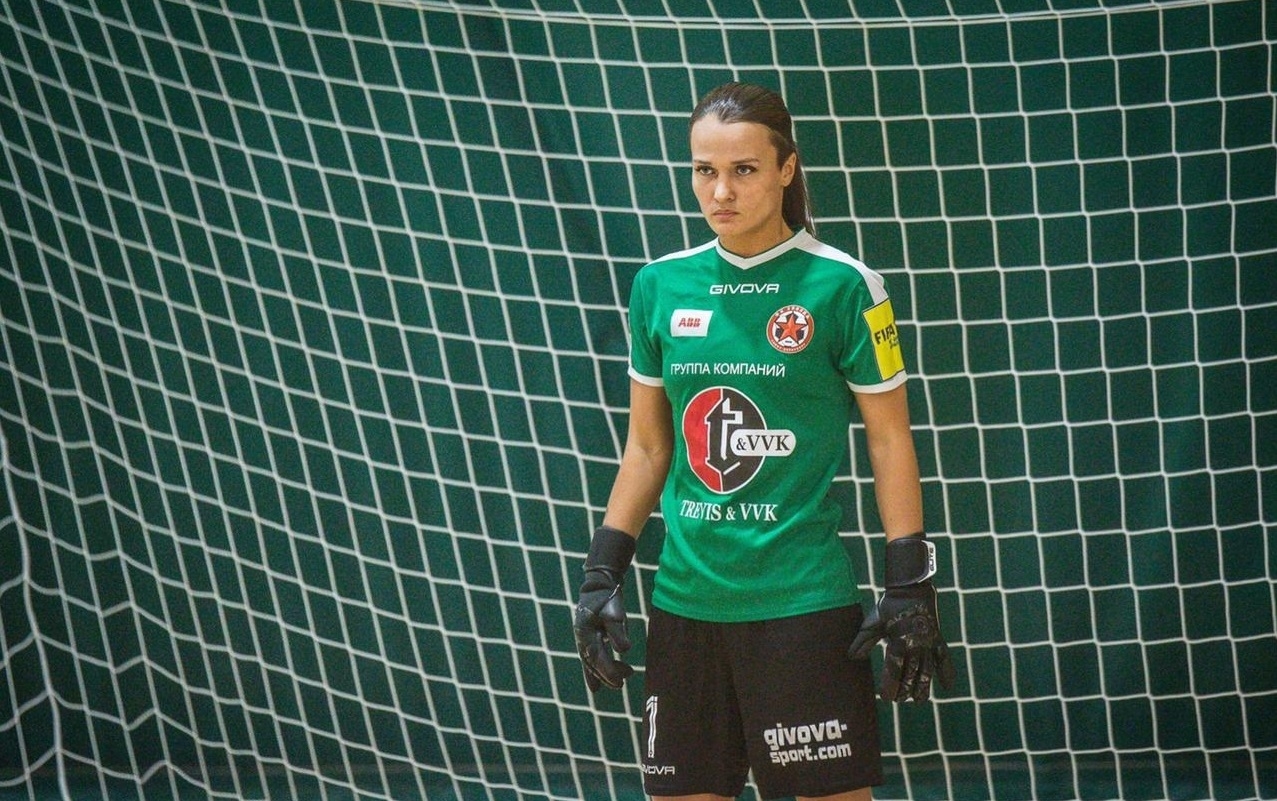 — You are a representative of the role that took first place in modern beach soccer. How does it feel for the goalkeeper to be so responsible for the game and the team's result?
— The goalkeeper's position is always a big responsibility. The result of the match largely depends on how the goalkeeper plays. That's why I've been working on myself for the last two years, not only in terms of physics but psychology as well. I try to quickly forget the missed balls and return to the game with a cool head. After all, a good goalkeeper is not someone who misses less, but one who tries to save the team until the last moment. And all mistakes we can sort out after the final whistle.

— In most of Zvezda's matches of the past season, it was very noticeable that the goalkeepers divide the playing time almost equally. Is it a tradition, or does the coaching staff vary each goalkeeper's time on the field depending on the playing factors?
— No, it's not a tradition. It depends on the status of the competition. At the cups and championships of St. Petersburg, we, in fact, always divide the playing time equally. At higher level tournaments, the coaching staff looks at the actions of each goalkeeper during matches. For more essential games, coaches decide who will be on the field more. The choice is made not during the training but the game.

— We can say that "Zvezda" dominates in the domestic competitions. In this regard, is there not a lack of decent competition that would help in team development?
— Competition is the engine of progress in the sport. Of course, it is not enough. If, for example, we have 7-8 teams of equal strength, both effort and output of players will be significantly increased. In this case, the potential of each player will be better revealed. Unfortunately, sometimes in training, I see the opposite picture.

And for the sport itself, a high level of competition will allow for a much faster development, which women's beach soccer sorely lacks.

— What do you think women's beach soccer in Russia lacks to make this sport more popular with the audience?
— Our women's beach soccer is developing every year. New teams are emerging. The level of play is increasing. Every year we take one more step towards the development and popularization of our sport. Unfortunately, it's happening too slowly. I can find three reasons. The first is the number of tournaments, both domestic and international. There should be more of them. The second is the financial conditions of each club. And the third is the interest of the players in our sport. 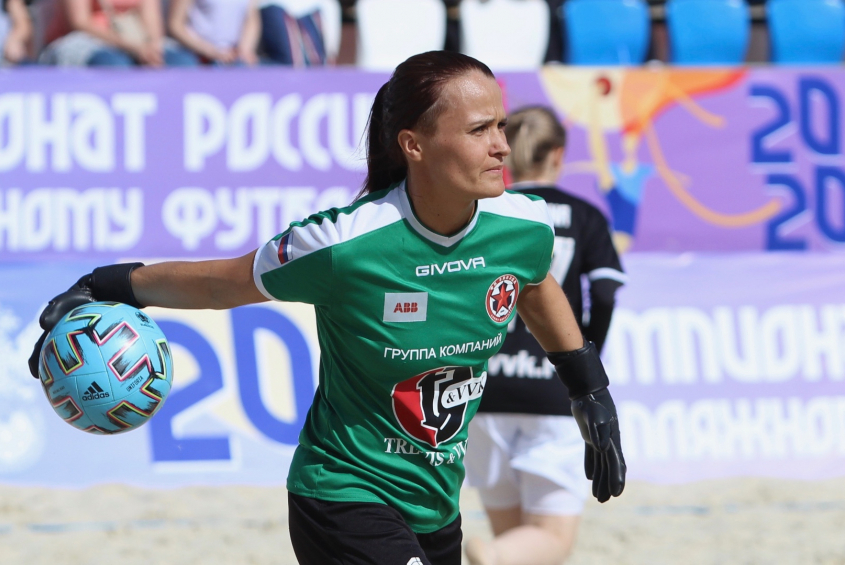 — What are your plans for 2021? How far have you managed to adapt to the current conditions with restrictions?
— Plans are ambitious. Now, in a period of pandemic and restrictions, there is no certainty about the future. Therefore, I try to get the most out of every day.

The team has begun full training. Everyone is in a good mood. We work with the hope that all tournaments will take place in the upcoming season, and the coronavirus will not be in our way anymore.

— In August, the FIFA Beach Soccer World Cup 2021 will be held in Moscow. Will you follow this event? What are the expectations of a home Mundial?
— I'd love to watch the World Cup live. If there is even the slightest opportunity, I will come to Moscow. I always follow my colleagues' actions in different game situations and take something useful for myself. It is hard to do this from the TV screen.

I look forward to bright and emotional matches, uncompromising struggle, and, of course, gold medals from our team from the tournament.

— No offense that women won't be able to participate in the Mundial?
— Playing at the World Cup is a dream! But I'm sure women's beach soccer will have its own. I hope I will see it, and then I can retire quietly (laughs).

Photos in the material was taken from the personal archive of Anna Akylbaeva and the Beachsoccer.ru website.