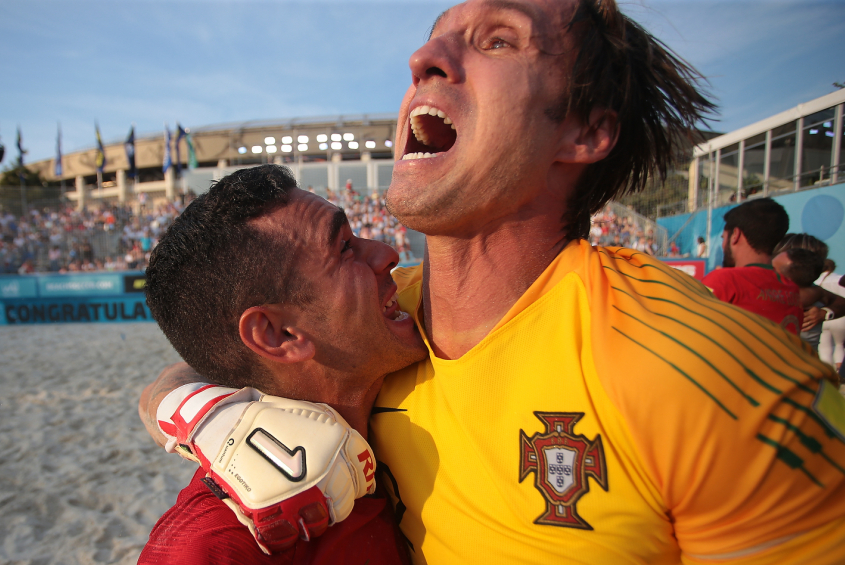 Andrade: God helped me save these penalties

Portuguese goalkeeper was crying after the game against Spain. He told us why.

Many experts considered a fifth place game the most important one even before the start of European World Cup qualification tournament in Moscow. But they would never bet this game was going to be between Spain and Portugal. There two teams were fighting for the win at the European Games in Minsk recently.

But it happened. Spain and Portugal put on the best show of the tournament. Portuguese goalkeeper Elinton Andrade became a hero after saving two penalties in the most crucial moment of the game. Andrade told BSRussia.com why he could not stop crying after this match.

- Elinton, the victory over Spain turned out to be very emotional. What does this success mean to you?

- We had a very difficult tournament, each match was difficult. We played vs Spain in the final of the European Games and it was a tough battle. This game in Moscow turned out to be even more difficult. Everything was changing so fast. We had to come back a few times but we managed to hold on. Emotions were really special after the game. I had tears in my eyes because of the stress. I am happy that the Portuguese national team is going to the World Cup.

- Is this one of the most emotional moments in your beach soccer career?

- I won the World Cup, European Games, was named the best goalkeeper in the world twice. Sport is so good that you never get bored of winning. Every time you experience great happiness. I know we did not win the World Cup in Moscow, but the way things were, I believe there was a lot to be happy about.

- What were you thoughts during penalty shootouts?

- God hepled me save these two penalties. For example, Llorenz never shoots hard from penalty. He usually looks at the goalkeeper and waits till he moves. Today he changed his traition, but for some reason I was ready for it.

- Were you surprised that you had to play with Spain for the fifth place?

- For sure nobody expected this. We talked with representatives of other teams, and everyone expected that Russia, Italy, Portugal and Spain would go to the World Cup. The fifth team was supposed to be Switzerland, but Belarus played really well and mixed things up. Congratulations to them, they got an excellent result. Three years agoPoland left Russia and Ukraine without the World Cup. Who could have predicted that? This is beach soccer. I feel sorry for Spain, but such things happen in sports.

- Absolutely! Russia is investing a lot of efforts and money in the development of beach soccer. You have one of the strongest national championships and very good players. Tournaments in Moscow always take place in an amazing atmosphere. Look at the stands, they are full now! I believe that Russia deserves the right to host the World Cup, and I am sure it will be held at the highest level possible.

- Do we have a chance to see you among the participants of the World Cup in Moscow?

- I dont know. Now I have the motivation to stay in shape until November. I will do everything to help the Portuguese team to perform as well as possible at 2019 World Cup. And thenI will think about continuing my career.