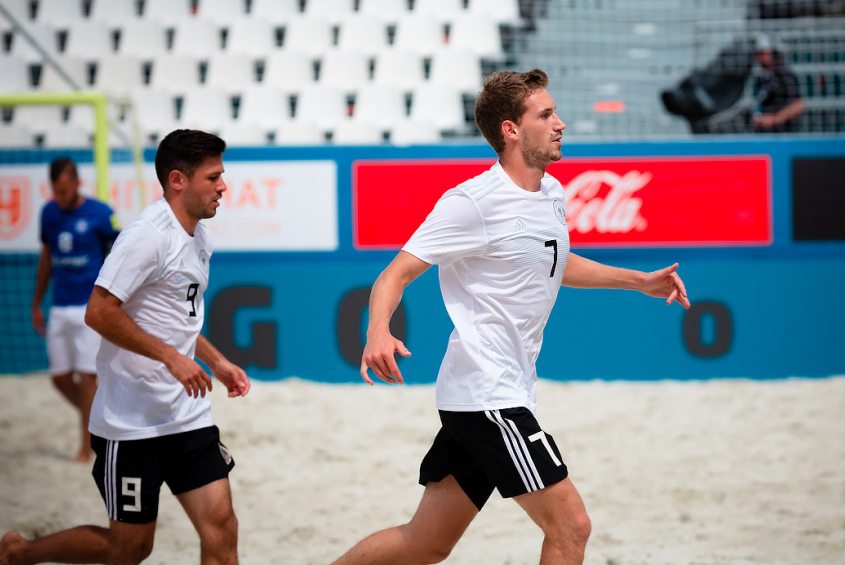 Biermann: Russia is one of the world leaders in terms of beach soccer development

Christian Biermann brought Germany a very important win. In spite of the injury.

The German national team could crash their World Cup dreams after the first group stage. After two losses in the first game they achieved a very important victory over Estonia - 5:3. The MVP of the match was Christian Bierman, who score four goals.

The German striker talked to BSRussia and explained why he could not leave the pitch today after the injury.

- Christian, this win was not easy for sure. What do you fell right now?

- I am very exhausted. The match was difficult, there was a tough battle every second on the sand. We were leading confidently but then allowed Estonia to come back. But in the end we got the victory.

- In the end you got injured. How serious was it?

- Yes, I got hit twice pretty hard, but I continued the game to help the team. Now it hurts, but I will have enough time to recover. I hope that I will be ready for the next match.

- German team lost two starting games. What is the main reason of your loss against Russia?

- The Russian national team is a two-time world champion and one of the strongest teams in the world. We needed a perfect match to win them, but it did not happen. The Russians were very strong and did not give us a chance. The pouring rain did not help either, but the conditions were the same for both teams. So we are not complaining (smiles).

- Game vs Hungary was much closer. What did not allow you to win?

- I think we did not have enough luck. It happens. We dominated, created a lot of chances, spent most of the time with the ball, but made three mistakes and lost.

- Did you play better against Estonia or the level of competitor was a little bit lower?

- We tried to play with more energy which gave an opportunity to create even more chances. I think it was a good match by the German national team. The main thing is that we guaranteed ourselves participation in the playoffs.

-Do you think you will be able to find more power to play even better in the next round?

- Of course! We do not want to go home, so we will do everything to win and get to the second group stage. But we will surely need to play more carefully and avoid mistakes. We do not know who we are going to play yet. Anyways, it will one of the best teams in Europe, so we will have to use every chance possible.

- How would you rate the organization of European World Cup qualification in Moscow?

- I think the organizers did an excellent job. It's great to play beach soccer at such a beautiful and impressive place.

- Russia is one of the world leaders in terms of beach soccer development. Your team won the World Cup twice, you have one of the strongest leagues full of world stars. So this is a perfect place for the biggest beach soccer competition.