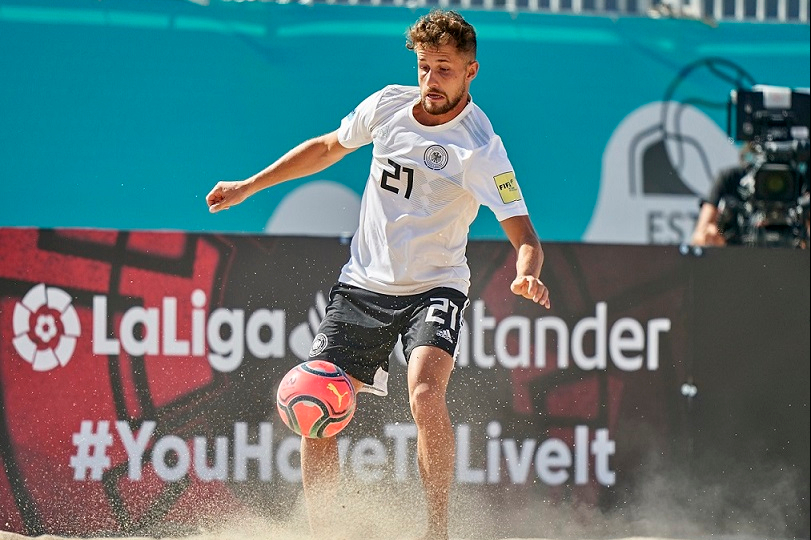 Hoeveler: “We are ready to prove to the world that Germany can play at the highest level”

An interview with a German international whose dream it is to play in Russia.

In a recent interview with a German newspaper, German national Football player David Hoeveler admitted that he dreamed of playing in Russia because he considered the Russian league one of the strongest in the world. BSRussia talked with David about his path in Beach Soccer, his views on the development of the sport, the difficulties of the training process in a lockdown, and, of course, expectations for the World Cup in Moscow.

— David, how did it happen that a footballer from the same country as Oliver Kahn, Bastian Schweinsteiger, and other stars of classic Football get into beach soccer?

— Oh, it’s a simple story. I played 11-a-side Football in Germany’s fifth league when I was 18. In the first season, I got injured. During rehabilitation, I spent a lot of time on the sand, including playing with the ball. That’s how I got into the company of my friend who played Beach Soccer, but only as a hobby. He asked me: “Do you want to play with me? Maybe it will be useful for you”, I thought “why not?”. It was the start of my path in Beach Soccer.

I played just for fun, and then Oliver Romrig came to me and asked if I wanted to practice with the Beach Royals Dusseldorf. That’s how I joined the professional team.

— And now Beach Soccer is your main sport?

— Yeah, Beach Soccer is the only sport I play right now. Of course, I can play with my friends on the grass, but my efforts are now focused on the sand.

— The past season was very difficult for the whole sport. How did it go for you?

— It was tough. To develop yourself, you have to play at a high-level, compete with strong rivals, teams. In 2020, we played only in the Euroleague, the Euro Winners Cup, and several matches in the national league. It is complicated to develop your skills with such poor playing practice. So it’s a tough season for everybody.

Of course, it would be great for everyone if there were more competitions, but I understand that in the current conditions, the organization of any tournament faces a massive number of difficulties.

— Do you train now without restrictions?

— The other day in Germany, there was a discussion that the lockdown will last at least until the end of February. So we can only train individually in the gym. I work with my Fitness Coach three days a week, and three days a week, I go out on the sand in the arena. But we can only play in pairs, so we do not have team training. I look forward to it because only by working as a whole team can we grow professionally. In three or four months of pair training, you already get out of the regular training process. It will take time to get back into it again.

— At the end of 2020, we got terrible news about the German Football Union’s (DFB) decision to suspend national team activities. But now, as far as I know, the situation is better. What are the prospects, in your opinion, for your national team to successfully conduct the 2021 season, taking into account such difficulties with training?

— This is a difficult question. If we can play and all the financial problems are solved, we can prepare well enough and be highly motivated. The Euroleague 2020 showed that we have a great young team with great potential. I am very proud to be a part of it. We are ready to prove to the whole world that the German national team can play at the highest level in Beach Soccer, like our colleagues from the 11-a-side national team.

We really want to develop our sport in the country to compete with the best teams. For us, Switzerland is an example. We have the same growth conditions, but they’ve played for more than 15 years and have achieved worldwide recognition. We’re still young, but we have everything we need to go in the same direction.

— The Swiss national team has world-class stars such as Dejan Stankovic and Noel Ott, who have been a kind of "locomotive" for the Beach Soccer development. Which German footballer can claim the same role?
— Undoubtedly, it is Christian Biermann and Sascha Weirauch. These are the players who have a lot of international experience. It is crucial for us, young footballers, to learn from them, watch their game, and take their knowledge and experience. They help us to step up year after year. These two players are now the key to the development of our national team.

— In a recent interview with one of the German publications, you said that you dream of playing in the Russian league. Which Russian clubs and players impressed you the most? And why do you want to try yourself in our championship?
— Russia and Italy have the strongest leagues in the world. Russia also has an excellent infrastructure for Beach Soccer. So, they are all development opportunities. One of my favorite footballers is Boris Nikonorov. He's an absolute monster. His game is incredibly strong. When I see him in action, I have only one thought: "Wow!". He always plays with incredible energy. It is an absolute dream for me to work alongside such a player or play against him.

Playing for such big clubs as Lokomotiv, Kristall, or Spartak, you can focus only on Football and grow as a player. In Russia, Beach Soccer is much more supported than in Germany or Spain, and teams have more opportunities. That's why performing in Russia is my dream, and I'm working on it.

— If any of the Russian clubs will invite you to participate in a short tournament, such as the Russian Cup, will you accept such an offer?
— Of course! I don't even care what kind of club it will be. The most important thing for me is to play. If such an offer comes, I will immediately say "yes" without hesitation (smiles). It will allow me to learn a lot, so there can be no other answers from me. If I am invited, I'll be there the next day.

— If we talk about learning something in Beach Soccer, it is impossible not to notice that the game has become more schematic. Teams with great goalkeepers who play well with their feet have a considerable advantage, realizing each of their possessions like most. How much of this trend makes Beach Soccer more theoretical? And is there a feeling that it reduces the attractiveness of the game itself?

— It's true that now goalkeepers have a massive impact on the game, but I don't think it's killing the Beach Soccer vibe at all. It is a lot of various schemes. You can invent new styles, try a lot of "homemade" stuff. Beach Soccer has become even more interesting in this regard.

Of course, if you have a Goalkeeper who has good control of the ball with his feet, that's a significant advantage, and you can vary your tactics and placement on the field depending on the playing situation. If you have Andrade at your goal and the Martins brothers and Jordan on the field, your team's arsenal is almost inexhaustible. For me, this trend seems to be a plus. The goalkeepers are involved in the game and play a quarterback role, as in American Football, and the team has the variability to create one-on-one situations.

— Playing in a team, would you prefer teammates who maintain order in tactical formations or players who have enough skill to improvise on the field to decide the outcome of the match individually?
— It's complicated to answer. I like players who are good in one-on-one situations, such as the Martins brothers and Christian Biermann. If you have such players, that's great. But I also like players like Philipp Borer from Switzerland. He's very smart with great vision of the pitch. It is also very important to have footballers in the front line with a good shot, such as Gori, Hoddle. There is no greater pleasure for me than to give a pass to them and see them scoring a bicycle kick. It is the style that I like to play the most - beautiful combinations. So it's perfect to have both of those in the team.

— Returning to Russian Beach Soccer, what do you think about the Russian national team? How, in your opinion, will the Russian squad perform at their home World Cup? And who will be among the favourites for the World Cup?
— The Russian team, of course, will be among the favourites of the World Cup. Two years ago, your team was very strong, both in qualification and at the World Cup itself in Paraguay. Only Brazilians, who are basically from another planet, will be able to compete with the Russians. I am also looking forward to a strong performance from the Italian national team. They have been playing with each other for many years, and of course, the Portuguese national team must show great Football. The Swiss will also fight for the medals.

If we consider Asian teams, then Japan is also, without a doubt, very good. But still, European teams are stronger individually.

— What are your general expectations from the World Championship in Moscow? Will it be a big disadvantage for Beach Soccer in general if restrictions remain and the tournament won't be held with full stands?

— Without fans, Beach soccer will lose some of its unique dynamics. In terms of marketing, the popularisation of our sport will suffer a lot. There will be no storyline from the stands on Instagram or other social networks. Without the cheerleaders, the tournament will lose a lot as well.

Of course, I would really like to participate in such a celebration as part of the German national team, but if it does not work out, then, if possible, I will come as a spectator to see everything live. Well, like many others, I would like to see a super-match between Russia and Brazil. It would be a great conclusion of the main world tournament from all points of view.

— What are your plans for the 2021 season?
— I would like to play in one of the best leagues in the world. Italian or Russian, but Russia is a priority for me in this regard. It's good to qualify for the World Cup. If the Euroleague takes place, then achieve more than last year and of course, work hard to reach a new level.

— How long do you think it will take for the sport to return to its usual form and to forget about all the restrictions?
— I really hope that by the end of the year, everything will be normalized, and already in 2022, we will be able to play for the fans without any restrictions, as it should be.

— And our traditional question. What five players would you be the most comfortable to play with?
— Philipp Borer, the Martins brothers, and Andrade at the gate.