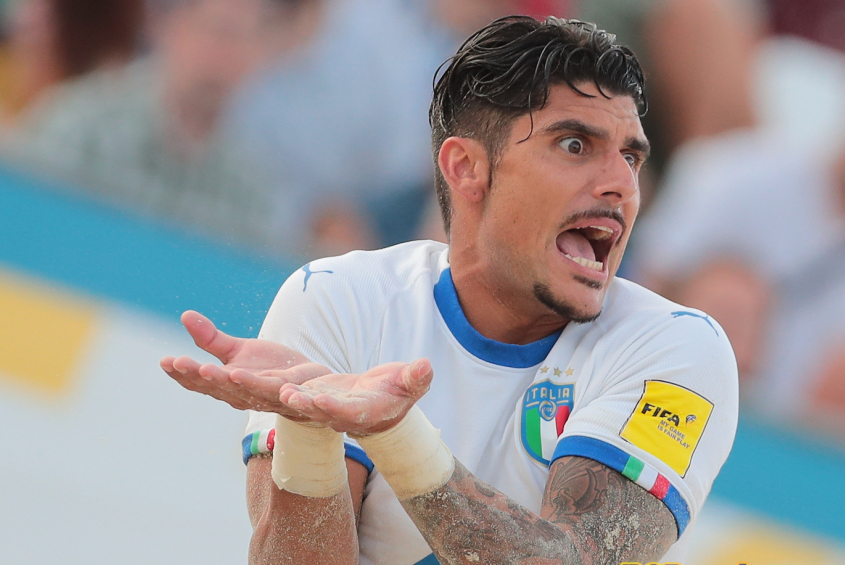 "World Cup is the only trophy Italy is missing. It's time to change it"

Gabriele Gori is happy to qualify to the World Cup in Paraguay and believes Italy can do very well there.

Italy had a big win over Portugal yesterday that allowed them to qualify to the World Cup which will be held in Paraguay in the fall of 2019. Portugal was in the lead for a long time, but Italy was able to turn things around and achieve their main goal.

BSRussia talked to Gabriele Gori who told us what this victory meant to the team and what we can expect from Italy at the World Cup.

- Gabriele, what are your emotions right now when you know you are going to Paraguay?

-It was very tough for us. Especially after we lost to Belarus the day before. We knew we had to beat Portugal because we did not want to take chances and play another game to qualify. This result is special not only for me, but also for a big group of our experienced players. For some of them this coming World Cup may be the last one in their careers. We wanted to win for them.

- What about yourself? Can it be the last World Cup for you?

- Hopefully not. I still want to play beach soccer and keep going. But it’s hard to tell yet. World Cup in Russia in 2021? Who knows. It’s too far ahead.

- How did you react to the loss against Belarus and what did you improve in your game?

- Actually, it did not really matter if we won or lost against Belarus. We would have to beat Portugal anyways. So in this game we could not make any mistakes. The stakes were too high.

- Italy will play Russia in the final. Is it important to win the tournament?

- We already achieved our main goal, but games against Russia are always fun. I’m sure there will be a lot of people at the stands. Italy will try to win. Even if we do not, we will still enjoy the moment.

- Italy played in front of the full crowd today. How did you feel about it?

- It always gives you extra emotions when you play in front of so many people. Even if they support another team, it still motivates you to show the best you can.

- Are you surprised by the way team Russia destroys everyone at this tournament?

- Not at all. Russia is always a very strong team. And they are in excellent shape at this tournament. Last time we played against Russia they did not have Alexey Makarov. He is one of the leaders on Russian team. Now he is with the team and he will make our life harder for sure. But hopefully Russia won’t be too disappointed if we beat them (laughs).

- There were some unpredictable results in Moscow. Belarus, Russia and Italy did not get to semifinals in Minsk but achieved great results in Russian capital. Why do you think it happens?

- The level of European teams has grown up lately. If we talk about the top teams, anyone can beat anyone. So I’m not surprised that things changed a lot from Minsk to Moscow. And it’s good for beach soccer in general. The more it is unpredictable the better.

- You just talked to your family on Skype. What does their support mean to you?

- It means a lot. They were very happy that our team qualified to the World Cup. Of course, when we talked after the game, they congratulated me with this achievement.

- You mentioned before that this coming World Cup can be the last one for a group of players on your team. Does it give you more motivation to do better?

- We believe we can do well. I think we have grown as a team in the last few years. We spent a lot of time together. That should help. World Cup is the only trophy we are missing. It’s time to change it.