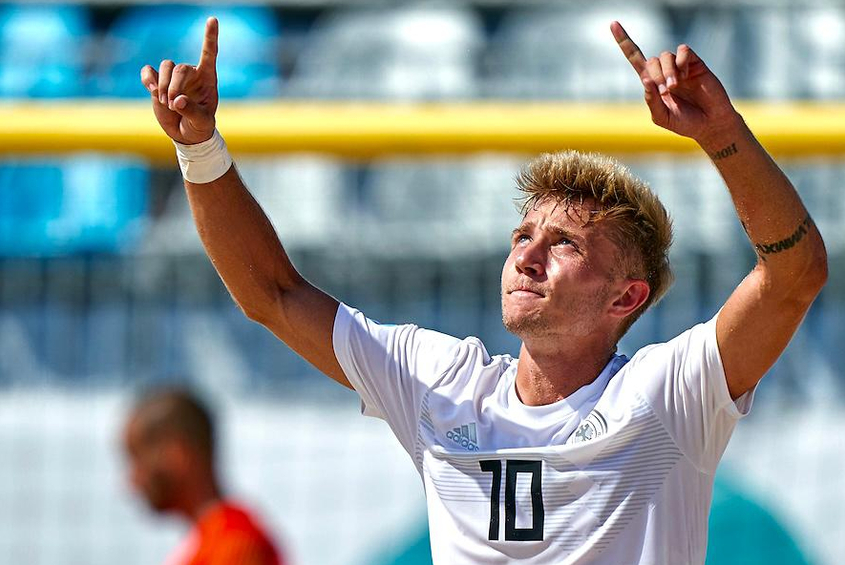 Metzler: "The main thing in beach soccer is to become a friend of the sand"

Exclusive interview with one of the best German football players "right now" for BSRussia.

The 2020 season was very successful for Joscha Metzler. With German national team, he performed brilliantly in the Euroleague Super Final, scoring 4 goals in four matches, and with the club "Real Munster" he took third place in the Euro Winners Cup, which no German team had previously managed to do. At the same time, 2020 brought news of the suspension of the German national team. BSRussia spoke to Joscha about the past season, the shock of the decision of the German Football Union, future plans and activities outside the pitch.

— Joscha, how did you come to play beach soccer?
— A friend of mine took me to beach soccer and I've been fascinated since day one. The sport and its technical, tactical features are a lot of fun. Also, traveling with the teammates through the countries is always very special.

— Who was your role model in beach soccer? Who were you guided by in your development on the sand?
— I always try to learn from the best. First in Germany and later internationally. In every team and especially in every country, the way and style is different. Here you can learn a lot technically, tactically, but above all personally.

A big factor for me was my national coach Matteo Marrucci. He showed me what it takes to get out on the field and play the game. If you have a club, you should sign him now. But above all of them is my friend Marcel Nowak, also german national player. Our daily training is the foundation for everything.

— The year 2020 was the most unusual season in the history of beach soccer for well-known reasons. What are your main impressions of it?
— I've trained for a long time without a goal. Nobody knew if we could play in 2020. The joy was huge to be back on the field in the sand. All events were very safe and without any problems. I hope we can play with spectators again soon.

— How do you rate your performance in Nazare for both the club and the national team?
— I think that my performance in Nazare was the next step in my development. In 2020, I reached a fundamentally different level. I was able to score a lot of goals for the national team and the club in the Euroleague and at the Euro Winners Cup. The German national team is performing better and better, only high-profile results are missing. I think everyone noticed that.

My first Euro Winners Cup was very successful. We finished third after losing to Braga in the semifinals of the tournament. Never before in history has a German team achieved such a result. The Real Munster family can be proud of us.

In Germany, with my club Ibbenburener BSC, we won the national championship with 11 wins in 11 matches. Undefeated champions (smiles).

— 2020 also brought bad news for German beach soccer. The German Football Union (DFB) has suspended the national team. What do you think about it? And is there any chance of a change in the situation in the near future, because then Germany will have a chance to participate in the 2021 World Cup.
— The entire German beach soccer community is in shock. The DFB officials don't understand what they did at all. And communication with us does not stand up to any criticism. We found out about it from the news! This decision angered me and a lot of other people associated with beach soccer. The huge commitment to our sport from the players of the national team, players of all clubs, coaches, fans, sponsors and all the people who have built German beach soccer for more than 20 years is simply ignored.

Negotiations are currently underway with the DFB on a new structure for the national team. Any sport needs a national team, without it, beach soccer in Germany will simply die.

— What was the reason for this decision? Does it lie in the financial plane, or is the problem something else?
— Of course, the real reason is not specified in the press release. For me, and for the rest of the national team, the main problem is that we don't have enough lobbies in the DFB. You can even call it a political decision (smiles). The people responsible for this just don't know enough about beach soccer.

— Do you think the sport will ever return to its usual form? Or do we always have to live with the limitations now?
— I think we always have to make the best of our options. The times will definitely be easier again and we will be able to present our sport better again.

— What are your plans for 2021, given such an unstable situation?
— I am preparing for top level in 2021. With my german team Ibbenbürener BSC we want to improve further, continue to be the best team in Germany and we are also qualified to Euro Winners Cup. We'll have to wait a little longer with the national team. Hopefully my debut in the italian SerieA will work out this year. It's hard to plan in times of pandemic but I'm ready. In any case, a project is running with "VOLLEYPASS" on Instagram with videos and training sessions to make beach soccer in Germany even more popular.

— In addition to beach soccer, do you have any other classes? Not necessarily in sports?
— I study parallel to Sport, Sport Business Management. I also have various projects with my friend Marcel Nowak, also a national player. We organize Beach Soccer KidsCamps all over Germany. We produce training videos in the sand and have some exciting projects ahead of us. With VOLLEYPASS Project we accompany these projects on Instagram and TikTok and we now have a community of 100,000 people.

— Do you consider playing for any European clubs if you have a good offer?
— Sure, of course. I hope I can still visit many countries, cities and people through beach soccer. I train hard every day to be ready for more opportunities to come up in the future. I am free and would be happy.

— Do you follow Russian beach soccer? What do you think about the Russian clubs and the national team?
— Of course I follow the russian beach soccer. It has a long tradition and is one of the best in the world. The teams are run very professionally and some of the clubs have big names. This is important to convince new people of our sport. Russia beach soccer is a role model. I'm looking forward to the new generation of beach soccer player in Russia.

— What are your expectations for the 2021 World Cup to be held in Moscow? Who, in your opinion, will be the favorite of the tournament?
— If the World Cup goes as planned, then the teams that had the opportunity to train will have a huge advantage. It is difficult to talk about any expectations in these times. In the context of a pandemic, I take care of the here and now.

— Which team do you support in classic football? Who is the favorite player in football 11-a-side?
— Of course my home club Fortuna Düsseldorf. But in general I'm a fan of coaches in football. I like Guardiola and Tuchel.

— A new generation of coaches has now grown up in classic football who do not have relevant experience as players. And they are quite successful, such as Julian Nagelsmann. Is it possible in beach soccer?
— Beach soccer is a fairly young sport. In classic football, there are coaching schools where you can get the necessary knowledge. Beach soccer doesn't have that yet. So, in my opinion, at the moment, the ball will be ruled by coaches who have game experience. But in the future — it is quite possible.

— And our traditional question. What would be the ideal "five" in which you would feel most comfortable on the sand?
— I've been waiting for it (laughs). I'll take Elliott as goalkeeper and Llorenc with them I could play together in Spain. For me, Be Martins is the best player and Christian Biermann as a role model for every german player.