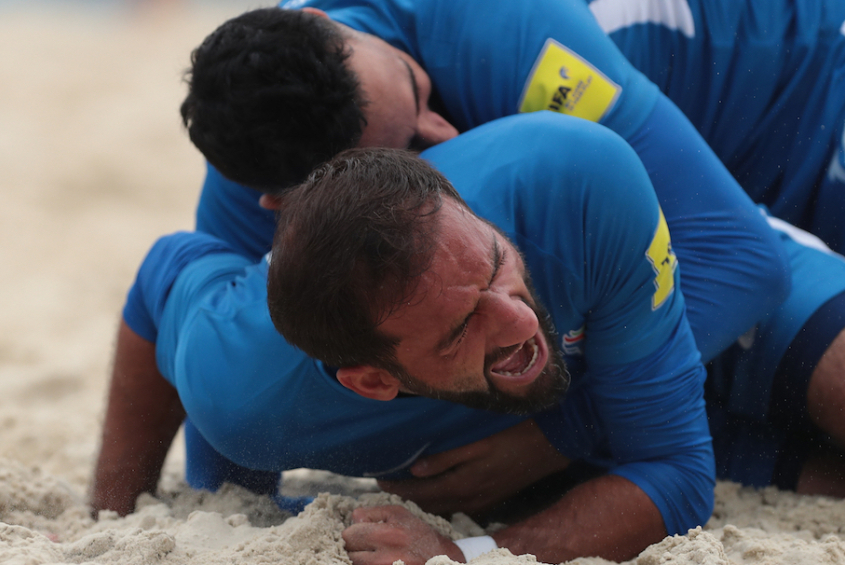 "Do or die". It was a decision day for all the teams at the World Cup qualifier

20 teams came to Moscow to fulfil their dream. Now there is only 8 of them left. Could all favourites make it through?

It was a day when everything was put on a map. It was “do or die” type of situation. You win and you go to the second group stage where anything is possible. You lose and you go home with your World Cup dreams over. So there was no doubt there would be a lot to witness in Luzhniki today.

The opening game of Round 16 between Azerbaijan and Hungary was one of the most exciting clashes here in Moscow. A lot of Russian kids were at the stand in Luzhniki and it felt like they were cheering for team Azerbaijan. Russia’s head coach Mikhail Likhachev and his assistant Ilya Leonov also came to the stadium early in the morning to watch their possible opponent in the the second group stage. Russia still had to play Moldova late in the evening, but everyone realized that most likely the home country will make it through.

Azerbaijan and Hungary’s game was like a roller coaster. Hungary was in the lead twice, their legend Viktor Fekete made two brilliant assists. There was four minutes left to play in the third period when Sabir Allahguliyev got a chance to score from a free kick. And he did! But he first shot was called off due to referee’s decision. Sabir stayed calm and scored again with his second attempt.

Game went to extra time and then to penalty shootouts. Azerbaijan was better and got their most important win of the season. Hungary fought hard but was not lucky enough to go to the next round.

Germans should be proud of themselves

Poland was a favorite against Germany in Round 16. But in real life they had to invest as many efforts as possible to qualify to the second group stage. Polish team was up 2:1 with less than a minute left to play in the third period. Germany got a chance to do free kick. And team’s captain Sascha Weirauch scored pretty much from his own net!

Unfortunately for them, Germany lost in overtime after Jakub Jesionowski’s header. But the German’s should be of themselves. They achieved quite a lot, they were fighting till last second and they have a new raising star of beach soccer. Chrisitan Biermann scored another brilliant goal at the tournament. He scored 8 goals in 4 games. Considering the whole team score 11, you can imagine how good is Biermann.

He had a chance to save Germany in overtime against Poland too but hit the post. Anyways, he is only 25 and will have more chances to showcase his talent. May be even in Russian Superleague one day. ;

Seven out of 16 countries in playoffs represented ex USSR countries. That is already a huge success for most of them. Lithuania surprised a lot of people winning Turkey and almost winning Belarus. We already told you about Azerbaijan’s victory over Hungary. This team is now just steps away from going to the World Cup.

In the fourth game of Round 16 Belarus beat France with a score of 4:1. And they did it without their superstar Igor Brishtel who remains injured. Spanish coach Nico did a good job in terms of getting his players ready for the most important game of the tournament. He went all in and was successful.

And, of course, it is necessary to mention about Kazakhstan’s fight against one of the best national teams in the world. Italy was winning 3:0 and 4:2 but Kazakhstan came back. It was a tie game after two periods! Could you think of such turn of events before the game? Yes, Italy destroyed their opponent in the third period but it was a good clash anyways.