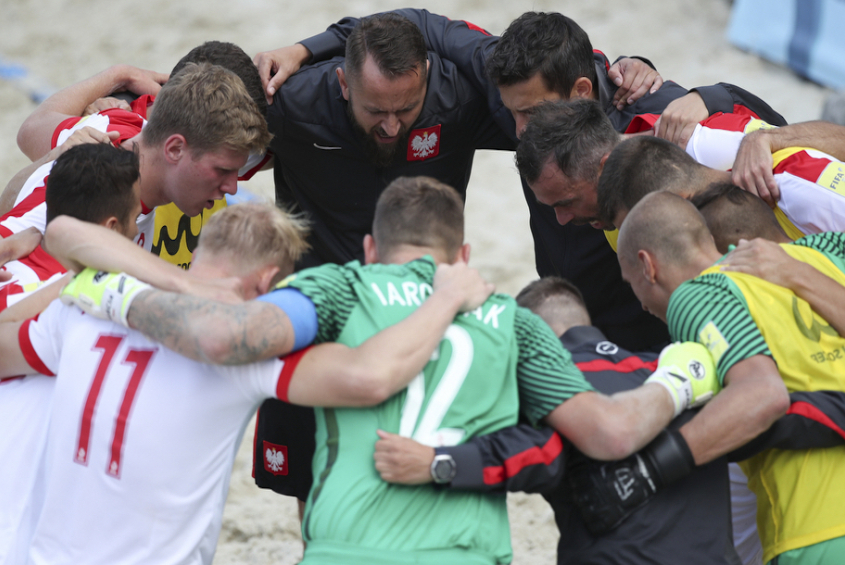 Importance of a second. Big drama at the start of the World Cup qualification in Moscow

First day of European qualifier got everything – joy, tears, own goals and a crazy shot that reminded us about Roberto Carlos.

The first game of 2019 European World Cup qualifying tournament in Moscow brought a lot of fun and entertainment. Team Poland and Czech Republic faced each other on the sand at Luzhnki venue. This place hosted 2018 FIFA World Cup final which was one of the best in the history of football. When you play at such a historic venue, you can not play bad.

Three years ago Poland beat Russia in the World Cup qualifier and 2-time World Champion lost a chance to go to the Bahamas. It was a great victory for Poland that put this country on a beach soccer map. They were the favorites against the Czechs and when they led 2:0, it seemed that there would not be any problems for them.

Luzhniki saw a lot of crazy stuff last year. Craziness came back with beach soccer. There was only 4 seconds left on the clock. Poland was leading 2:1. Czech Republic set up a nice attack and managed to equalize right before the whistle. The Czechs were happy, it was like a victory for them. Polish team on the contrary was very upset.

People say anything can happen in beach soccer. This game proved it 100%. Poland tried to shoot from the centre mark, initial shot was blocked, but the ball came to Jakub Jesinowski who scored with just a few seconds left! That was it. First game of the tournament set up a great example for the rest of the teams.

Second game of the day brought a bit less drama but there was a number of interesting moments as well. France was leading Norway 1:0 when an amazing own goal happened. Norway player Johan Elverum Salveson tried to pass the ball back to his goalie from far away. But the goalkeeper was not ready for such a turn of events, so the ball smoothly went into his net! If this goal was scored to an opposite net, it would be a beauty.

We all remember amazing free kicks by the Brazilian star Roberto Carlos. There were a lot of them, but one really stands out. Brazil was playing France in 1997 and Roberto Carlos scored from a free kick giving the ball crazy spin. Even the scientists were investigating how the ball got such a trajectory.

Norwegian goalkeeper Thomas Sandsfor got a chance to to the free kick from pretty much his own net. And he scored! The ball firstly went to the left side but then changed its direction and went right. French goalie obviously was not ready for that. That is how Norway tied the game.

Unfortunately for them that was their best moment of the game. France scored three times after that and got 3 points.

Game between Hungary and Estonia was the first in Moscow that went to extra-time. Both teams wanted to get the extra point really bad. Estonia was making an attack but left some space for Hungarian player Balazs Rutai who got the ball after the rebound and scored just like Barcelona striker Lionel Messi likes to do.

He came one on one with the goalie but did not shoot at first. He faked the shot, passed the goalkeeper and easily scored on the empty net. You do not see this type of goals in beach soccer very often. It was something from big football and it was good.

Italy was a big favorite in a game against Kazakhstan, but the team from ex USSR almost surprised everyone. After 20 minutes of play Kazakhstan was leading 2:1. Only in the third period Italy managed to take the game under control. It was very close to sensation anyways and that is exactly why we love beach soccer. If it was not for Gabriele Gori who scored twice and added an assist to that, who knows what could have happened.