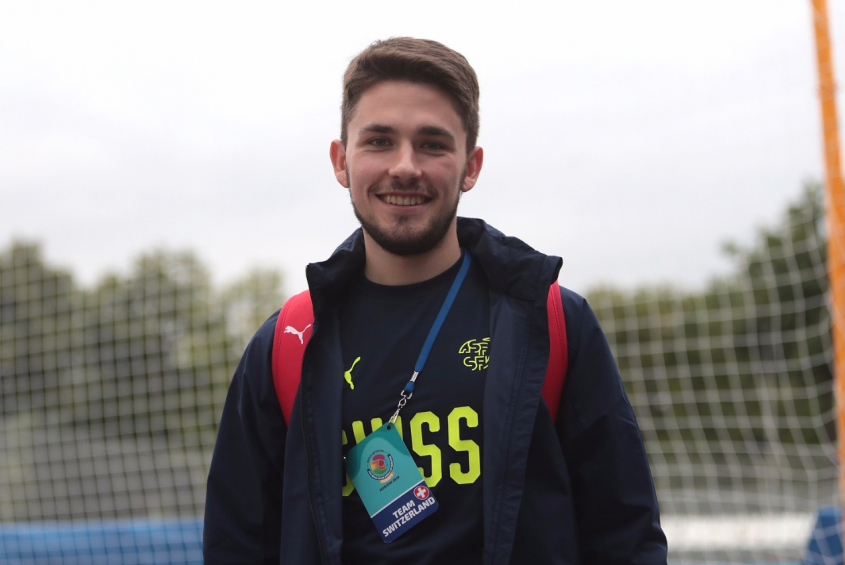 "This experience will last a lifetime". We found a Russian guy in team Switzerland

He has four different jobs in the team and helps Switzerland qualify to the World Cup.

Swiss team brought the least amount of staff to the European qualifying tournament for the World Cup 2019 in Moscow. Among all other teams. Apart from the head coach Angelo Schirinzi there was only one person in the administrative headquarters – a guy called Alexander. He is a physiotherapist, a masseur, a doctor, and even an administrator. Is there anything he can not do?

BSRussia noticed how Alexander switched from fluent English to fluent Russia when he started talking to organization staff in Moscow. We could not pass by and asked a young Russian man how he ended up being such an important part of team Switzerland in beach soccer.

“For the most part I am a physiotherapist and a massage therapist. There is a very good rehab doctor Roman Zheltov in Moscow. We have been cooperating for quite a long time and I have been learning a lot from him. He gave me a call and said that the Swiss national team needed a massage therapist for this tournament. I liked this offer and agreed to help. Then I contacted Angelo. We discussed all the details, it turned out that they still needed a physiotherapist, because it was very expensive to bring him from home. I had no problems with that”, Alex explained.

You could have thought that the guy was just lucky, but it was not all about luck. Alexander has been learning English since childhood and still attends one or two classes a week. He never really got a chance to use his language skills to the fullest, but now he has got a lot of practice. Ability to speak English was one of the main reasons why he got this job.

“It is a tremendous experience and emotions that will last a lifetime. I invited my friends at the weekend so that they could come to the stadium and witness my new job from the stands. It's very cool. I used to work with athletes individually, but working with the whole team is a completely different experience. You need to find an approach to every single player. In the morning they go to the stadium in one mood, but after the match it can be totally different”.

The new physiotherapist of the Swiss national team knew quite a lot about beach soccer and watched a lot of matches of the Russian team. He could not imagine that one day would be helping the other team in real life. He was very diplomatic when we asked him what time he would support when Russia and Switzerland face each other.

"I will hope that the Swiss players will not get any injuries, so as the Russian players. I hope there will be a great fight, and both teams will qualify to the World Cup”.

Alexander’s involvement is not limited to medical duties alone. He helps with translation, does simple things like calling a cab and tells about places to visit in Moscow. Players did not get a chance to do sightseeing yet, but as soon as such they get a chance, Alex will definitely take them on a tour.