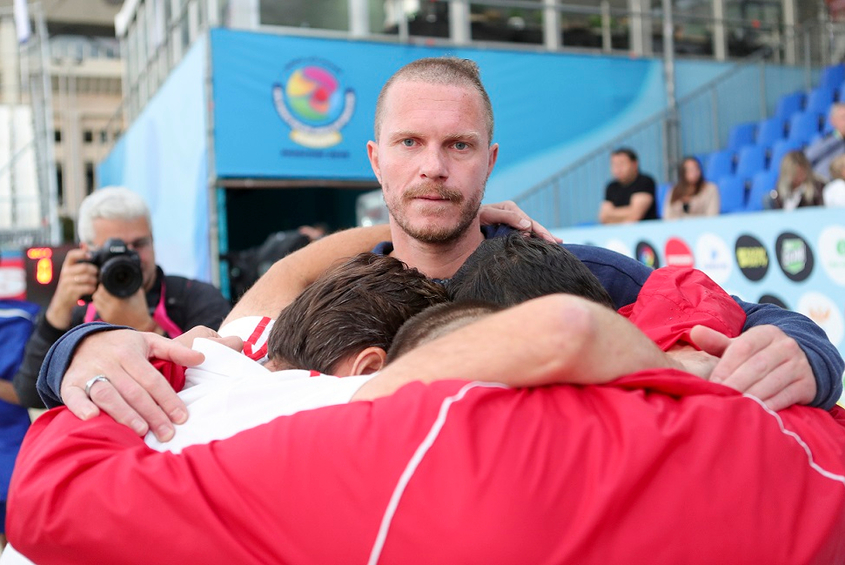 Today, quite unexpectedly, in an interview with Konstantin Igropulo, one of the symbols of the Russian team's glorious victories announced about the end of the player's career. Andrey Bukhlitsky will no longer go out on the sand as a Goalkeeper. After a long forced break in 2020, Andrey rebooted his playing career and played in the Russian Cup, but, in his own words, he felt that he had "played enough." BSRussia sadly, albeit fondly, remembers the best matches of the legendary Russian goalkeeper.

The Russian national team set a record for the tournament in that match, but it was a tough match for both sides. Despite the best efforts of the Swiss leader Dejan Stanković, who almost scored with every shot, Andrey Bukhlitsky kept the goal so well that the Swiss ended up scoring one less goal than the Russian national team. In regular time, the game ended 9:9, and in overtime, the goals of Yuri Krasheninnikov and Anatoly Peremitin tipped the scales in Russian favor.

According to many fans, it is one of the key matches for the Russian national team. An excellent start, 2:0 in favor of the Russian team, but then the Spaniards turned the game around and took the lead 4 - 2. At the beginning of the final period, Nico had a chance to make "+3" for his team, scoring from a free-kick, which was not so far from a penalty area. But with a sharp jump, Andrey shortened the distance and deflected the shot of the Belarusian national team's current coach.

The Spaniards did not score any more in the game, and commentators repeatedly returned to that moment with the phrase "what a great save by Bukhlitsky".

"Andrey didn't let Nico score that penalty, and then we changed the course of the game, we won, and qualified for the World Cup. The Spaniards didn't get the spot, and we became champions. Therefore, this match will always be in our memory," - Mikhail Likhachev, the Russian National team coach, shared his memories.

To miss from the "golden" Portuguese team only one goal in 36 minutes is a blessing. Moreover, at the start of the third period, Russians had to play with a man less because of Dmitry Shishin's red card. However, the great effort of Andrey Bukhlitsky did not let Majer and company score the goal, despite playing with a majority, and a few minutes before the end of the regular time, Arthur Paporotny's kick from the center took Russia to the final.

"There is no magic. It's our job. Our team fought and won. Today we watched melodrama, comedy, and a thriller combined. All this is Beach Soccer. Like all southern players, the Portuguese, like the Brazilians, love to play on the audience, to simulate. But I believe in honesty, and honesty wins," - said Andrey at the end of that match.

Another memorable match for the Russian national team happened at the World Cup in 2013.

The game was very intensive. The Russian goal was occupied by Bukhlitsky, who made it as difficult as possible for the other team to score. Realizing this, his teammates could not fail to help him win this match. Dmitri Shishin's victory goal, scored with a classic "sand shot," will be remembered for a long time by all who saw this match up. It was another crucial step towards the second gold medal for the Russian team.

For the second time in a row, the Russian National Team had to face the tournament hosts under the leadership of Angelo Schirinzi on the way to the final of the World Cup. Despite the absence of several disqualified Tahitian players, the home nations terraces' were full of fierce home support, which led to Mikhail Likhachev's team not expecting an easy time of it.

However, only three times did the ball end up in the Russian national team's net. It happened because of great teamwork by the Russian team in defense. The most memorable moment came when the score was 2:3 in Tahiti's favor when the Russian goalkeeper confidently saved and did not allow the opponent to increase their advantage. Soon, Aleksey Makarov and Dmitry Shishin scored three times and took the Russians to the final.

"It seems everything was as it should have been. But then, reviewing the game, you realize that Bukha helped so much," - that was the review of Andrey's game by the captain of the Russian national team in that match Ilya Leonov.

The match that ended with the most unusual score for beach soccer. Moreover, in addition to the "dry" net behind his back, Andrey was also responsible for the only goal against Portugal. In the eighth minute of the match, the Russian goalkeeper sent the ball into the opponents' net goal. Bukhlitsky has made a real goalkeeper feat in this game, also saving a nine-meter penalty shot of Majer.

One of the biggest matches in the history of the Russian national team. The usually invincible Brazilians came for another title, but Mikhail Likhachev's team had different ideas. In Ravenna, The Russians proved that the common expression "you will score as much as you can, and we will score as much as we want" can be used against Brazilians too. The South Americans were able to celebrate eight times, but Russia scored twelve!

Of course, the ancestors of Beach soccer had many moments. In the end, Andre sent three balls to Russian goals, but by that moment, the result had already been made. The first-ever championship of the Russian national team was finally in their hands, including the hands of Bukha, the very ones which stopped a lot of shots directed at his goal by the Brazilians.

"This match, of course, is a milestone. Despite the score, Andrey's role in the victory was colossal," said Mikhail Likhachev, remembering the best games Andrey played.

The winning finale is worth revisiting completely and reliving those emotions.

Before the 2020 Russian Cup, a hugely pleasant surprise was the information that Andrey will return to the sand. He played for Delta (Saratov). Before the other meeting, Emil Jabarov's team had no room to make a mistake and had to beat a strong team from Baltiysk in the regular time.

4:0 after two periods in favor of Delta. Everything seemed to be going right. But in the third period, Kronstadt-Promenade scored three goals, and 12 seconds before the final whistle, there was a penalty on the Delta's gate. What happened next? Look at the video.