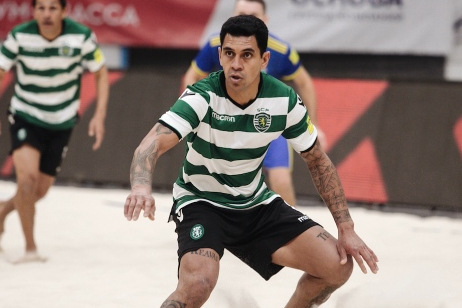 Taiarui: being at the World Cup is the main goal for me and Tahiti this season

​The best player of World Cup-2015 flew 27 hours to Russia but was not very surprised by the snow. Obviously the victory over BATE made it warmer.​

Heimanu Taiarui was named the best player of FIFA World Cup-2015 in Portugal. It souns even better when you you find out that he played there for the national team of Tahiti. In Russia, Tahiti is probably associated with the famous phrase from the animated film which is impossible to translate into English. But trust us, it does exist and Russians know it.

But thanks to Heimanu we also learned about Tahiti through the prism of beach soccer. And this week the athlete came to distant Russia, having overcome tremendous distances on an airplane to play for Sporting at the club Mundialito-2019. BSRussia could help but ask Taiarui t a few questions after the game vs BATE.

- Heimanu, you just won the first match at the tournament. How hard was it for you?

- It is very difficult (smiles). I still have a monstrous jetlag. I arrived in Moscow today at three in the morning, can you imagine? And on the same day at the evening I had to come on to the field and fight for the team. It was very hard. I can say that it took me quite a long time to adjust to the sand. At first it was difficult for me to do something.

- I can only imagine how long was your flight. How many hours did the whole trip take?

- If we talk about the flight itself without the rest of the road, then the whole process took about 27 hours. I flew from Tahiti to Los Angeles, then made a transfer to Paris, and from France I went to Moscow. Quite a long flight, right?

- How would you evaluate the game against BATE?

- In general, I would say that we played normally. Not perfect, but ok. Bate was very well prepared physically. They ran a lot today, it was hard for us to keep up with them. In addition, they were always in the lead which made it even harder for us.

- How did you like this indoor arena in Moscow?

- It was the first time that I played beach soccer in such conditions in a major tournament. To be honest, when you play indoors, it is very hard for you to breathe. But when you get used to it, everything becomes normal. At the end of the match, I even caught myself thinking that I liked to play on this sand and with the roof closed.

- How do you like the weather outside the stadium?

- A bit cold (laughs). It seems that the thermometer showed a temperature of minus 6. Of course, speaking seriously, I was not used to such weather. You know where I'm from. But I'm not scared either.

- Have you ever seen snow before?

- Yes, it was in Switzerland where I work. And in general, I would like to say that I travel quite a lot, so I saw different weather conditions. You can’t surprise me with snow (smiles).

- What are your plans for the upcoming season?

- I will continue to work in Switzerland. I hope that my job will allow me to take part in some other tournaments. I really want to find time for this. Plus, the Tahiti team will participate in the World Cup quaifiers. It will be in June. Let's see what we can show there.

- Is it safe to say that this qualifier will be the main goal of the season for you?

- Definitely. For me, this is a big dream. Not even a dream, but a goal, as you said. I will tell you honestly, it will be very difficult for us. Five teams will play there, and only one of them will go to the World Cup. Anything is possible with such a scenario.

- What are your goals for this tournament in Moscow?

- You know, I am so tired right now that it is even difficult for me to assess our chances and goals. The main thing is to have a good rest, sleep and then think about the next game. The best players of the world gathered here at Mundialito, so I’m waiting for a battle in every game.