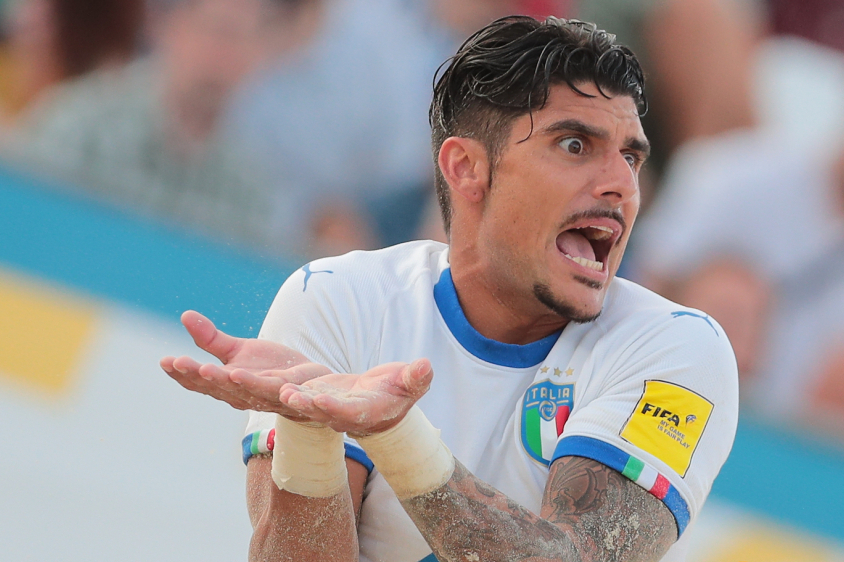 Gori: "Beach soccer in Italy is a huge bluff."

Following Dario Ramacciotti, Gabriele Gori spokes about the tense relations between the Italian national team players and the national federation.

Hitting through yourself is what Gabriele Gori does best. For him, this is very easy, if it comes to the ball, which must be sent to the net of the opponent's goal. But it isn't easy to the limit when it is not about what is happening on the site but what surrounds it.

Dario Ramacciotti, Gori's teammate from a thousand matches for Viareggio and the national team, was the first to complain about the strange relationship between the Italian Football Federation (FIGC) and the players in a year when Italian beach soccer went on to the break due to the pandemic outbreak. Now Gabriele himself decided to speak out.

- Gabriele, what is happening now between the players of the national team and the federation?

— I felt abandoned. I often hear people say: "You are Gori, you have scored almost a thousand goals, you certainly get privileged treatment... ". But this is far from the reality.

— What is wrong with relations with the federation?

— We thought and hoped that after the World Cup final at the end of 2019, we would finally enjoy more attention.

— Nothing happened — complete lack of dialogue. However, during 2020, the coronavirus, to put it mildly, was not our assistant. For this reason, we were counting on support. Unfortunately, as Dario said, " we have responsibilities as professionals, but rights as amateurs."

— How do you imagine 2021 with these prerequisites?

— I'm sorry, and I don't hide it. With the improvement of the world's epidemiological situation, 2021 promises to be a season full of matches for clubs and the national team. But we don't know what's waiting for us yet. Everything is in standby mode. It is wrong of me to give any assessment now.

I can only say that beach soccer in Italy is a monumental bluff. It doesn't provide us with a livelihood. There are people abroad who invest in this sport because they believe in it. But unfortunately not in our country. Now it is impossible to imagine a two-or three-week field training camp without financial support.

At the age of twenty-two, when I was starting, I could afford it without any responsibility. However, today I have a family and a job to which I devote myself entirely. If I get lucrative short-term offers from foreign clubs, they will take priority. The emotional attachment disappeared when I decided to leave Viareggio. Now I think only as a professional.

— What is your attitude to the national team now?

— I don't need to fawn on anyone right now. I want to preserve my dignity. I can't pretend that Nothing has happened, as if everything is going as it should. Of course, I hope that a solution will be found, a way to reach an agreement. But I'm skeptical.

— What happens if it doesn't happen?

— At the moment, it's not a big deal for me. I have already been robbed of many opportunities to enjoy beach soccer. I won the European Championship, several other medals and reached the final of the World Championship. That was fine, but priorities change over time.

— Which club will you play for in Italy?

— Now there are no ideas about this. First of all, it will be necessary to understand how the next championship will be held, how many teams will participate, and the opportunities because sponsors will not invest pre-coronavirus funds in beach soccer. The risk of closed doors is still real. However, I haven't spoken to anyone yet, not even to Napoli, with whom I had an agreement in 2020.

— Why don't you go back to Viareggio?

— Why not? A decade later, I felt the need to try something different, hence my decision to leave. But I never said I didn't want to go back. Indeed, my idea was and still is to end my career at Viareggio to help Coach Santini and give my son a taste of the beach stadium's atmosphere. Without any financial obligations to the club.

— How many more seasons do you expect to play?

Three seasons, I don't think I will stay for more.